The Six Stages of Boom, Bust, and Recovery 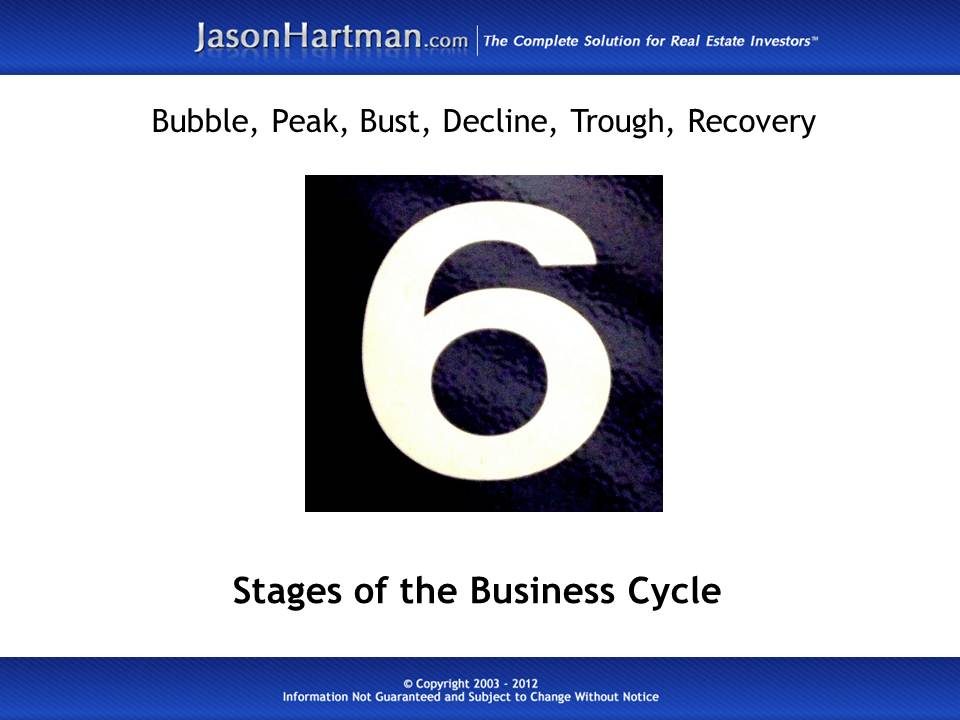 The persistent economic recession that was triggered by the financial crisis of 2008 and has lingered through 2010 is showing every sign that it will drag into 2011. This is not intended to be a foreboding of doom and gloom, but an honest assessment of the fundamental mis-alignment that the economy is still attempting to reconcile. The reason for this slow, anemic recovery is a fundamental misunderstanding of the fundamentals that drive economic growth, bubbles, crashes and recovery.

The advent of business cycles is certainly not a new phenomenon. Economic expansions and contractions have been commonplace throughout human history. The thing that has made this economic downturn so painful is the fact that it followed successive decades of “fine tuning” the economy by government and quasi-government institutions that skewed incentives and systematically diverted economic resources away from their optimal use. When this artificial stability (necessarily) collapsed, the result was a much more intense adjustment than most people had anticipated.

In order to understand this phenomenon more completely, we should begin by examining the six stages of boom, bust, and recovery. These stages are built on top of a natural growth trajectory for free markets that systematically allocate resources to their optimal economic use. The reason why booms and busts materialize in the first place is when public policy shifts the incentives for market players so that they reap greater rewards from pursuing actions that are not economically optimal. (Even if they are politically favorable) These six stages are the bubble (aka ‘boom’), the peak, the bust (frequently involving a ‘crisis’), the decline, the trough, and finally the recovery. Each of these stages plays an important role and merits further examination.

The Bubble
Bubbles are a market phenomenon where the price of something (such as stocks or homes) rises much higher than is justified by its underlying fundamentals. Stock Market bubbles are frequently driven by speculative buying of companies that have not yet produced a profit but are expected to grow rapidly in the near future. Real Estate bubbles are typically driven by a change in financial policy that makes it easier for people to obtain financing, resulting in more buyers and higher prices. In all cases, market bubbles rely on continued escalation in price for a particular type of labor or asset that eventually surpasses its fundamental value.

The Peak
When bubbles reach their zenith, they result in a market peak. These peaks are impossible to predict in advance and only become apparent when viewed in hindsight. The way that they typically emerge is when ‘casual’ investors hear about the spectacular profits being made by other people and finally decide to buy into the market. Unfortunately, many of these casual investors buy-in just as the irrational value escalation reaches its apex. All bubbles share a common characteristic in that the price increases will eventually reach a point where no new buyers can be found. Thus, what the peak really represents is the stopping point where nobody else is willing to pay more than the last person did.

The Bust
When bubble markets eventually rise to a peak, there is typically some type of ‘trigger’ event that initiates a sell-off. Sometimes it is a disappointing earnings report, sometimes it is news about political unrest that may disrupt food or energy prices, and sometimes it appears to be nothing at all. However, in all bubbles, there eventually comes a time when new buyers willing to pay higher prices cannot be found and prices fall. If a rapid succession of bad news accompanies this reduction in prices (as was the case in the fall of 2008) then the adjustment can turn into a crash.

The Decline
At this point in the market cycle, most of the players finally come to realize that the assets they were buying aren’t fundamentally worth the previous market prices. When it becomes apparent that the hot new stock is not going to reach profitability as expected, or that the large speculative property will not have any buyers, it frequently results in a sell-off among investors who cannot afford to carry the asset indefinitely without selling. During the bubble, there was a surplus of buyers relative to sellers and now there is a surplus of sellers relative to buyers. The decline can be further intensified by the fact that many investors feel uncertain about buying-in since they do not yet know where values will eventually hit bottom.

The Trough
When values finally reach a low enough point that investors are willing to accept the risk of further losses in exchange for the opportunity to capture upside gains, a value bottom is frequent reached. In some cases, the trough can last a very long time if investors are systemically unwilling to begin buying aggressively because of fears that future growth expectations will materialize. Alternatively, if banks are holding many foreclosed properties, they will naturally want to sell those properties as quickly as possible, provided that they do not drive down the market prices even further. Ultimately, the length of the trough depends on how many mistaken investments need to be disposed of. This process is extremely important, because it systematically shifts the ownership of capital toward people with the prudence to deploy it responsibly.

The Recovery
Once the over-priced capital has been sold at reduced prices and the new owners begin deploying that capital in a way that produces value, a recovery can ensue. Fundamentally, economic growth emerges when the same amount of input can produce a greater output. (This is also called productivity growth) Put another way, the recovery unfolds when labor and capital eventually find their optimal use. This is the only way that our economy will return to a path of real growth.

In the end, market cycles are critically important to long-term growth and prosperity. They are a way of systematically steering resources to their optimal use. This happens as the people who made foolish decisions go out of business and are replaced by people who purchase their assets at low prices and have a built-in incentive to operate more prudently. The important thing for each person to understand is that this process cannot be avoided. Attempts to ‘fine tune’ a ‘soft landing’ for the economy will only drag out the inevitable adjustment.

Economic progress means that capital and labor must find its optimal use. When the economy gets to a point where the present use of capital and labor is far away from its optimal use, that means a period of extreme adjustment is inevitable. However, for the people who see this trend and capitalize on the opportunities inherent in times of change, there are historic opportunities for gain. The only question remaining is whether you will take advantage of the opportunity or be thrown about by the change. The forces are the same . . . the circumstances are the same . . . it is your decisions and actions that will make all the difference. (Top image: Flickr | rosmary)