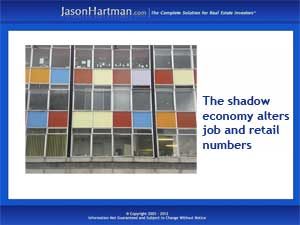 Yes, the Federal Reserve is going to wind down the bond buyup. Really, this time. After making a bold statement about its intentions to emd its stimulus buyup of bonds and securities in 2014, the Fed now says it’s on track to taper down the program in the last quarter of 2013. That plan could be derailed, say financial experts, if the job market begins o slide. But according to a new report from The Daily Ticker, an expanding “shadow economy” estimated at $2 trillion in earnings is missing from that equation.

Employment numbers are calculated in terms of the numbers of people actively in the labor force, and the number of new jobs created and filled. Those numbers reflect traditional employment in the usual sectors of the economy. But there’s another economy at work in the country – the so-called shadow economy of people working in legitimate occupations like house painting, driving or computer repair but who are getting paid “under the table” in cash or checks, off the books of a traditional payroll that deducts taxes and retirement benefits.

This shadow economy has always existed, say financial experts. But since the last recession and the slow recovery that followed, this group of people working for themselves, finding non-traditional ways to make money is larger than usual. What’s more, people are staying in the shadows longer rather than earning this way as a very brief bridge between “real” jobs.

While some shadow workers do pay taxes on their earnings and even create their own retirement accents, many don’t. Yet they do return their earnings to the economy in purchases and sue of services. That gives a boost to retail and other sectors that may not correlate with the official employment picture. The buying power of shadow workers can rival that of their employed counterparts.

But because these workers don’t show up on the official employment rolls, their numbers aren’t included in reports about the state of the job market. And, some economists say, their absence causes statistics on the number of working people to skew downward, even as other sector slew upward because of their participation.

Job Stats Versus the Real Numbers

That means that the employment numbers and data from other sectors the Fed is using to gauge the progress of its securities buyer may not accurately reflect what’s really happening in the economy. And that has industry watchers worried, since the drawing down of the buyup plan eliminates the Fed’s artificial intervention to keep interest rates low and boost the recovery in areas such as the housing market.

The mot recent announcements about the future of the bond buyup sent tremors through the global fanatical network and raised questions about the health of the housing rebound once interest rates are allowed to settle at natural market levels. For investors looking toward new mortgages or refinancing options, clues to the future may be hidden in the shadows.  (Top image:Flickr/gorogen)

Jason Hartman is the complete solution for income property investing. Read more from our archives: