The Rental Housing Market: A Winning Year for Landlords? 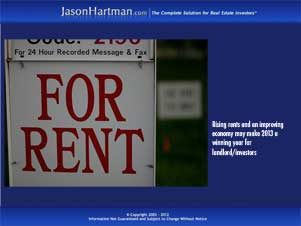 Rising rents and a widening pool of ready tenants are making 2013 the year of the landlord in many areas of the US housing market. As the economy continues its crawl out of a recent slump, more people are choosing – or are forced by circumstance – to rent dwellings rather than own them. That means that landlords have more options about choosing tenants and setting rents than in recent years.

In the years leading up to the housing bust of 2008, the rental economy had taken a backseat to the flourishing market for easy home sales. As home buying became more easily accessible, potential renters opted to buy homes – for mortgage payments not so different from monthly rent.

But once the housing bubble burst and foreclosures flooded the market, rentals surged, as former homeowners unable to keep their homes scrambled for places to live, and economic conditions locked other potential buyers out of the market – sometimes permanently.

Changes in housing trends affected the rental market too, as “empty nest” retirees and younger professionals opted to rent on a more or less permanent basis rather than own a home. The result: by the end of 2012, housing industry experts had begun to predict that in the next few years, the US would become a nation of renters, with homeownership nothing but a distant memory.

Although that may be a farfetched scenario, rental housing is in demand, the supply of available homes is dwindling, and rents are going up – but not enough to sway some of these permanent renters into buying a home instead, thanks to tighter mortgage lending standards and general economic conditions.

This increased demand for rental housing in all arenas – apartments, multiplexes, and single family homes – gives landlords more leeway in setting rents and screening tenants. Cone are the days, according to some financial experts, of move-in specials and other deals intended to entice tenants. And landlords are more willing to initiate eviction proceedings with problem tenants since keeping properties rented is much easier now.

Generally speaking, rents are expected to rise from 2013 and beyond by about 5 to 7 percent annually in larger markets. Some increases are due simply to higher costs of doing business that are passed off to the tenant, such as utilities. Maintenance and other fees paid by t he landlord to keep the property running. Other increases reflect parity with the market in general.