The New Housing Shortage: A Drop in Foreclosures 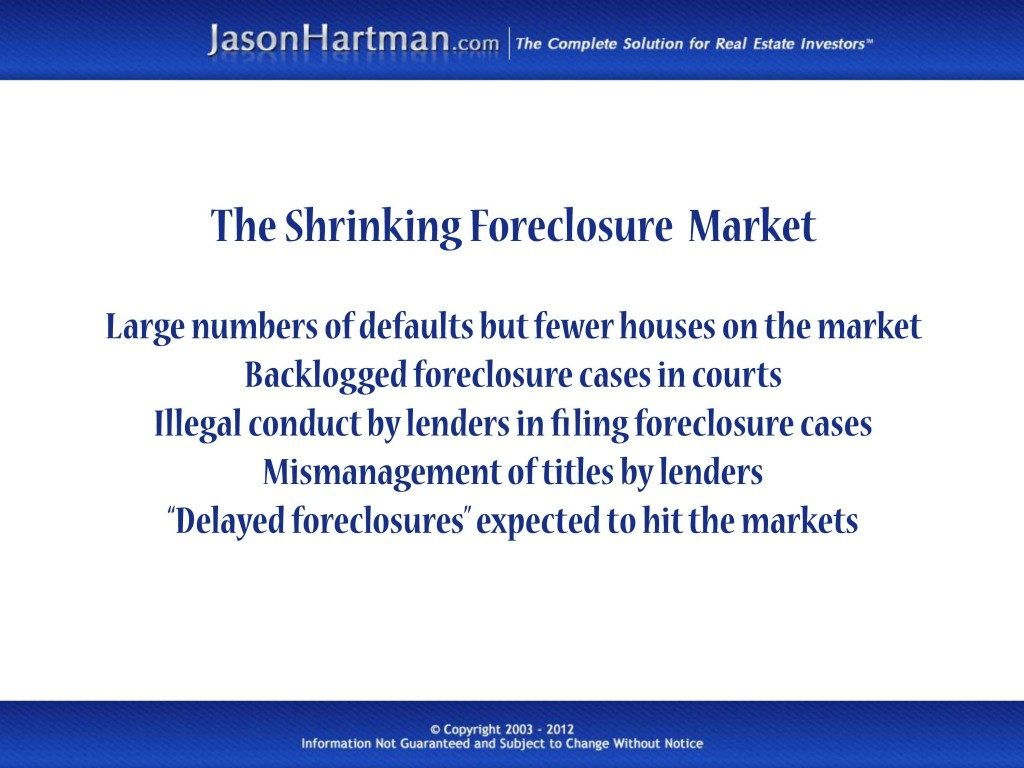 As the housing market struggles to rebound after the recent real estate collapse, conditions are ripe for rental real estate investing. Low interest rates and increasing demand for rental housing are factors which create the potential for long-term income from investment properties, as Jason Hartman advises. But as the foreclosure crisis winds down, the supply of distressed properties is shrinking.

The mortgage crisis that struck the housing industry primarily between 2008 and 2011 resulted in unprecedented numbers of foreclosures. Mortgage payments ballooned and homeowners, unable to pay, were forced to turn their houses over to lenders who than put the property back on the markets sometimes for a fraction of its worth. Because so many foreclosure cases were being processed, homes of all types hit the market at low prices, creating opportunities for investors small and large to snap up multiple properties for a minimal outlay.

For investors just entering the real estate market, that avenue continues to be one of the most affordable ways to begin an investing enterprise. And though large investors with plenty of cash have also made inroads into the foreclosure markets, the sheer number of foreclosure proceedings should mean that there are plenty of houses to go around.

And, according to Fannie Mae’s latest quarterly report, that’s potentially true. Over 5 million loans have been labeled as delinquent or actively in foreclosure as of the first quarter of 2012. But the problem lies with delays in processing foreclosure cases nationwide.

In some areas, foreclosure cases are backlogged in the courts due to the sheer number of such cases, resulting in a glut of “delayed foreclosures” on the market when they’re finally resolved. In other situations, though, questionable, and even illegal, practices in the processing of foreclosure cases have stalled proceedings.

The illegal practice of “robo-signing” – mass-processing foreclosure documents without verification – was exposed in 2010, with several leading lenders forced to settle with consumers. But other illegal strategies are sill being used, and new laws targeting them have been passed in several states. Legislation in California, for example, now requires mortgage services to show the title of the loan in order to prove they have the right to foreclose. In other areas, all loans in foreclosure must undergo a review to demonstrate that all documentation is in order. All these issues have slowed the processing of foreclosures to a crawl.

Experts in real estate law expect that once new legislation is in place and fraudulent practices are being cleaned up, many if not most of the foreclosure cases currently in the courts will be valid and the houses will be released to the market. But until then, investors may want to follow Jason Hartman’s advice to diversify investments and look for new properties beyond the limits of foreclosed single-family homes.