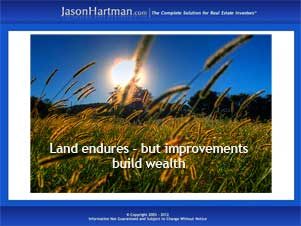 “The best investment on Earth is – earth,” prominent real estate investor Louis Glickman once said, and Glickman’s words point up why real estate is the best investment for long term wealth building: it’s real, it’s solid and it endures. But as Jason Hartman says, it’s not just earth, but what goes on the earth that builds real wealth from real estate.

Real estate has more staying power than any other investment precisely because it’s grounded (pun intended) in a commodity that’s physically solid and doesn’t disappear – unless of course there’s a flood or other landscape altering disaster. Precious metals, stocks and bonds are essentially abstracts that have value largely because human beings have decided that they do.

But everyone needs a place to live or do business – and that’s why land wins hands down over other kinds of investments. Even so, though, land itself is static. Its value can change depending on market conditions – but improvements to the land add real investment value. Adding or upgrading structures and smart use of the land itself are what create a significant return on an investment.

Smart investors consider that land to improvement ratio when choosing properties for long-term investment – and it’s not the same in every market, or every location in a given market. Properties are generally appraised according to two valuations: the land itself plus improvements, or structures, on the land. Both combined make up the “just market value” of the property.

Some kinds of land, in some locations, cost more than others. Lakefront property, for example, might cost more than an inland lot near an industrial zone. Inner city lots may be valued differently than a bare lot outside town. Land of all kinds may be cheap in some areas compared to equivalent properties in more desirable ones.

The structures on that land can vary in value too. But while the kinds of changes that can be made to the land are limited, the kinds of improvements aren’t – and it’s those improvements that help an investor build wealth.

The land versus improvement differential may also play a part in calculating taxes and return on the investment, too. It’s important to take all these factors into account when you’re planning investments. Jason Hartman points out that buying low cost land with improvements value will offer the best return on investment. As the saying goes, the land endures – but improvements build enduring wealth.  (Top image: Flickr/boscd’anjou)