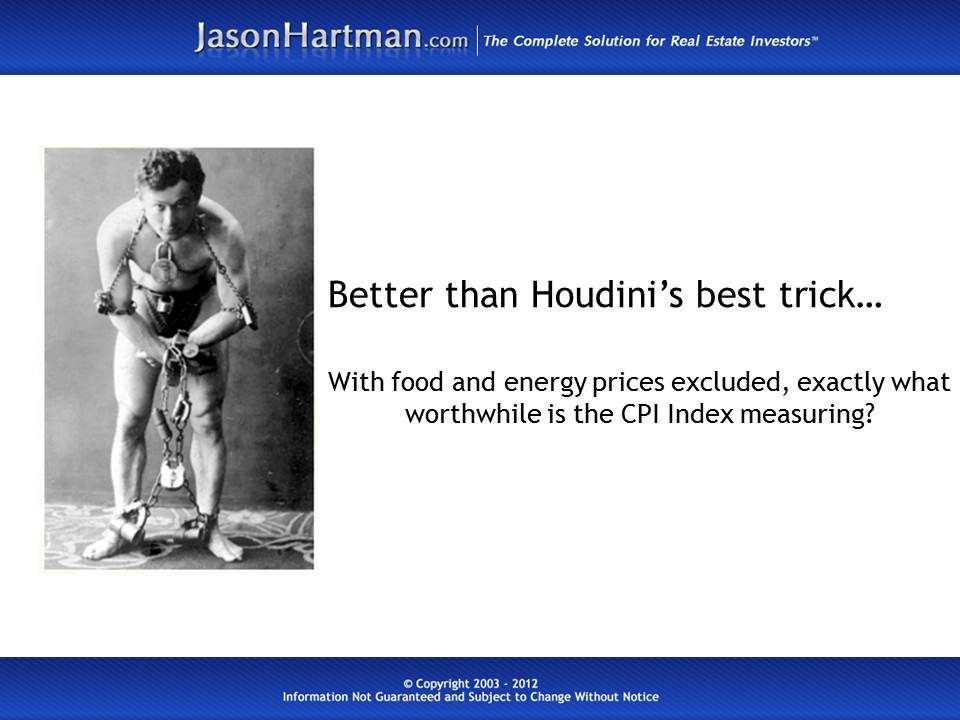 The Consumer Price Index (CPI) is one of the most closely watched indices by mainstream media, especially as of late. The government and media frequently paint an “oh so simple” picture of what the CPI represents, as if it is the final world on inflation or deflation. Most of us are distraught by the fact that we are currently seeing rising prices in nearly everything we need, such as food, clothing, and shelter. It makes one wonder, what is actually represented in the CPI and should we take it as fact?

The most-used CPI index is the CPI-U – urban consumers – which represents over 87% of the American population. Frequently, the media only cites the CPI-U “less food and energy,” which is the most popular representation due to its constrained movements. This is because “food and energy prices are volatile,” according to the Bureau of Labor and Statistics.

The interesting finding in this representation is the fact that food and energy affect consumers more on a daily basis than things like apparel or new vehicles. However, rapid increases in the prices of gasoline (which people use regularly) are excluded from the index while new items such as vehicles and apparel (which are infrequent purchases) are included. William Dudley, the president of the New York Federal Reserve, tried to explain how the Federal Reserve calculates inflation during a speech on March 11, 2011 and went on to explain how the newly released iPad 2 sells at a lower price and is superior to the original iPad. Of the many that were outraged by the comparison, one of the participants went on to say, “Yes, but I cannot eat my iPad!” This was to point out that we all need food, clothing and shelter and can do without gadgets; so saying that technology going down in price is a sign of a deflationary environment is not an accurate example of how people really live, even though the government measures and reports inflation in this manner.

Regardless of which index is represented in the media, the fact of the matter is that the CPI is a sample of the entire population. In no way does it represent the nation, since all markets (and all people) are different, and only major markets are sampled. For instance, consumers in Los Angeles, California may be feeling the heightened effects of inflation, whereas consumers in Dallas, Texas may feel minimal increases in prices. Only three major metropolitan areas are published monthly, Chicago-Gary-Kenosha, IL-IN-WI, Los Angeles-Riverside-Orange County, CA and New York-Northern NJ-Long Island, NY-NJ-CT-PA; 11 others are published every other month and 13 others on a semi-annual basis. Therefore, it’s likely the CPI is leaving out key data that would otherwise affect their so-called “inflation indicator.”

The Bureau of Labor and Statistics even states that the CPI has its limitations. Published directly on the bls.gov website, it states that the CPI is a representation of urban populations only and leaves out those living in rural areas, nor can it represent particular subgroups such as elderly or poor. Perhaps the most interesting fact about the CPI is that it represents only a small sample of the entire population. To the extent that your behaviors differ from the sample groups, the inflation you experience may be dramatically different from what is represented in the published indexes.

Over the past few decades, households have split, due to the heightened divorce rate and an increase in single-parent families. Since the CPI is measured in terms of “household” averages, the calculation of the CPI is systematically skewed downward due to the long-term contraction in average household size. This, of course, suppresses the overall rate of spending per household and thus keeps the CPI rate lower than it would be if expressed in “per person” terms.

The Federal Reserve has maintained the idea that they can control inflation and that their target rate of inflation is between one and two percent. However, given the fact that inflation is manifesting and clearly creeping past the target rate, who is to say that the CPI will not continue to be downplayed by the U.S. Government and Federal Reserve? The government and mass media can continue to feed the public illusionary numbers, in the CPI index. These artificially low index figures provide cover for maintaining the status quo, but will eventually result in considerable ‘real’ inflation. Thus, the only tool that we have to address this problem is by changing our spending and investing habits.

Action item: Jason Hartman offers a few suggestions. Reduce wasteful spending wherever possible. Develop a plan for spending on food, such as creating a grocery list of whole foods versus processed, growing a garden to cut out the middleman, or even scheduling days to go out to eat versus acting on impulse; this will allow your family to take advantage of deals and promotions instead of paying full price. And with the rising gasoline prices, it may make sense to take turns carpooling every other day with a coworker to cut down on undesired gasoline costs.

Now is the time to get creative on the “little” expenditures. In the end, it is the little things we need that end up costing us because of the recurring purchases, so figure out how to cut down on waste and lavishness and ride the wave of inflation without it significantly impacting your family. (Top image: Flickr | tmolini)