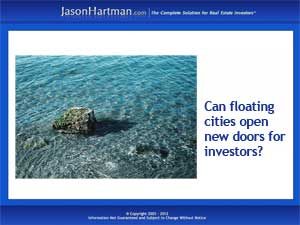 The future of real estate may not be on land at all. That’s the hope of the Seasteading Institute’s Floating City Project: an effort to create a floating city that it hopes will pioneer a new direction for human societies around the world. As the movement toward building cities on the world’s oceans accelerates, investors see new directions and new opportunities.

Seasteading, as it’s called, aims to move human habitation into the world’s oceans in the form of large self-sustaining cities where people can experiment with new forms of society and government that can then be adapted to land communities as well. Seasteading communities would be self-governing, and they’d contain all the essential components of land-based cities – schools, shops and services as well as business and industry.

It sounds like a utopian dream, and that’s what detractors call it – an impossible vision that’s blocked by technological difficulties and political opposition. For some, seasteadubg challenges traditional ways if living – land and communities that have grown over hundreds of years. The idea of a human made floating city brings to mind science fiction stories of a distant and unrecognizable future.

But the folks at the Seasteading Institute believe that a viable floating city is a logical next step in the development of human societies that is only a few years away. So they’re actively seeking crowdfunding from Indiegogo, the online project incubator, to make it work – not just for an elite group of innovators, but also for average people who share a vision for a new direction.

Funding is beginning to trickle in, too, as the seasteading movement gains traction among a wide variety of supporters from around the world. The idea is attracting attention from developers and investors who see new opportunities for old industries. And because the Seasteading Institute emphasizes sustainability, the project is drawing cautious support from environmentalists as well.

But major issues remain. Even though seasteading communities are being envisioned as independent city-states with their own government and infrastructure, they need the support of land-based nations too. And as the world’s oceans stuffer the stress of pollution and depletion of marine populations, seasteading advocates must be able to show that building a floating metropolis — or multiple large scale developments — won’t add to the problems.

Still, as usable land areas shrink and the demand for housing continues to increase, seasteading advocates see projects like the Floating City as the new frontier for enterprising real estate investors. As Jason Hartman says, people always need a place to live – and for income property investors, the future may be really be all at sea. (Top image; Flickr/WillStoneburner)

Can Digital Money Change the World?