The End of the Bond Buyup: Why It Matters 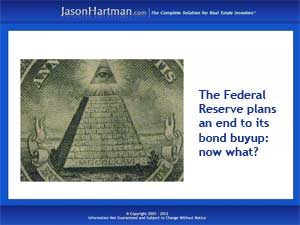 After months of maybe yes, maybe no, the Federal Reserve has made it official: its large-scale buyup of mortgage backed securities and other commodities is coming to an end. And while that won’t happen until 2014, the news has sent shock waves through markets around the world. Although the program itself remained a part of arcane financial news to many Americans, the fallout from its ending has the potential to affect people in all areas of the economy.

The Fed instituted the bond buyup plan in September 2012 in order to stimulate the economic recovery by keeping interest rates low and creating stable bond products that could back riskier trades. In this way, the housing market as well as other sectors would receive a much-needed boost.

But the Fed’s plan was always tied to the economic recovery, and as things improved, announcements hinted at a slowdown in the bond purchases. As things declined, Fed representatives discussed ramping it up. So Fed Chairman Ben Bernanke’s announcement this week that the program would soon begin to scale back shouldn’t have some as a complete surprise. But apparently it did, to numerous investors mad financial institutions around the world.

The most obvious area of concern is interest rates. The bond buyup was an artificial manipulation of the economy – a deliberate intervention to keep rates low. Without it, economists predict that markets will be scrambling to find a natural balance – and that means rates will fluctuate before settling into new, almost certainly higher, levels.

That has implications for borrowing that ripple throughout the economy, potentially affecting not only mortgage lending and the housing recovery, but also credit purchases for many other goods d services. Operating costs for a variety of companies are also likely to rise, with those costs passed on to consumers.

For investors, the picture is mixed. Those who took on riskier investments backed by these stable, low interest securities may be scrambling to revise portfolios in the face of possible losses. And banks around the world, whose rates ride on the average rates for US Treasury bonds, are rushing to make adjustments because of the news.

Financial experts caution that it’s too early to tell just what the fallout from the Fed’s decision will be. And since the bond buyup has always been tied to the health of the economy, a downturn in key sectors could mean an about-face. But although there’s turmoil in the markets ahead, for investors it’s still a good time to follow Jason Hartman’s recommendations on building wealth with mortgaged properties. (Top image:Flickr/SqueakyMarmot)

Can an IRA Launch an Investing Career?