Terrorism or Not? It’s All in the Insurance 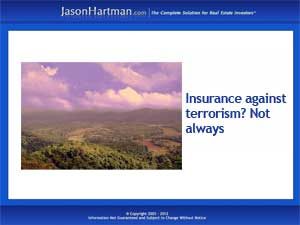 After a week of violence and terror that paralyzed the city of Boston and riveted the country, officials are calculating the true toll of the bombings at the Boston Marathon – a cost measured not only in loss of life but in economic terms. But unless the bombings are officially labeled a “terrorist attack,” home and business owners in the city and surrounding areas may not be able to file insurance claims for damage to property sustained during the bombings and the manhunt that followed.

The toll of attacks such as the Boston Marathon bombings runs high. The cost of the two homemade pressure cooker bombs exploded at the Marathon? Less than $500, according to some estimates. The cost of closing down Boston? About $333 billion per day. That’s including lost income and wages, the expenses of a massively heightened law enforcement presence and extreme demand for trauma teams and hospital services – on down to the loss of a bloodstained boat riddled with bullet holes.

In Boston, the bombings killed three people at the Marathon, injured over 170 others and triggered a massive manhunt that put whole neighborhoods on lockdown, with residents under orders from law enforcement not to open doors except to uniformed offers. The President and many other officials immediately called the events a terrorist attack.

If that’s the case, a little known insurance provision put in place after the 9/11 attacks could provide compensation for property damage. But as a new article in the journal of the American Bar Association points out, that might not happen, unless the Secretary of the Treasury, the Secretary of State, and the US Attorney General agree to the designation and the damage total exceeds a whopping $5 million.

The Treasury Department’s Terrorism Risk Insurance Program was implemented to offset damages caused by terrorist activities and efforts by law enforcement to counteract them. As it stands now, the program extends through the end of 2014, with options for renewal at the discretion of Treasury officials and the President. Claims made under the provisions of TRIA would be made directly to the Department of the Treasury. But unless total damages sustained in an event like the Boston Marathon bombings exceed the $5 million threshold, those events won’t be considered acts of terrorism at all.

There’s a grassroots movement afoot to buy a new boat for the owner of the one where bombing Suspect 2 was apprehended. But for homeowners, and others including income property investors following Jason Hartman’s guidelines, it’s wise to take a closer look at the provisions of existing insurance policies.  (Top image: Flickr/alanasiss)