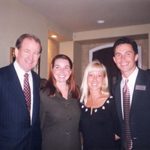 In the last few months, Jason has had some big name guests on the Creating Wealth Show. Some of Jason’s recent guests of note are Pat Buchanan, Robert Kiyosaki, and Catherine Austin Fitts.

Pat Buchanan is well known in the United States as an outspoken conservative voice in favor of limited government, and less globalization. In his Jason’s interview with Pat, they discussed the prospect for large amounts of inflation in the near future. Pat commented that the US debt would be floated away on a sea of inflation. At the Financial Freedom Report, we couldn’t agree more with this sentiment, and advocate that investors defend their financial well-being with income-producing assets that are financed with fixed-rate debt.

Robert Kiyosaki is the author of the noted “Rich Dad” series of books, games, and videos. In his interview with Jason, he discussed the importance of financial education in achieving success. They also discussed the importance of passive income to financial success, and the impact of dynamic investment strategies. Robert rightly pointed out that it is possible to make money in any kind of investment, and also possible to lose your shirt in any kind of investment. The key is always to become educated. At the Financial Freedom Report, we couldn’t agree more with this sentiment.

Catherine Austin Fitts is the founder of the Solari report, and is a renowned thinker in the financial world. She advocates for a decoupling from the centralized banking model that channels influence toward the dominant industry players and government. Put another way, she is an advocate of free markets but the current system is nothing even remotely resembling a free market. We advocate direct ownership of investment property as a way to help circumvent the systemic bias toward institutional players.

The Creating Wealth show will continue to seek cutting-edge thinkers that help provide insight into investing and the economy. We firmly believe in the importance of becoming educated, and the best source of education is frequently to seek advice from experts. This does not necessarily mean that we agree with everything that all of our guests say . . . what it means is that we believe there is always something that can be learned.