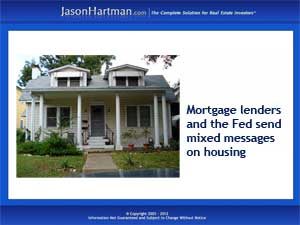 Combine federal manipulation of interest rates, tighter standards for mortgage lending and a surge in subprime loans, and what do you get? A blend of mixed messages and conflicting goals that leaves financial experts and homebuyers alike scratching their heads. And, some fear, the collision of all those trends may trigger another housing collapse.

As we reported in previous posts, the Federal Reserve’s massive buyup of mortgage backed securities was intended to help keep interest rates low and stimulate the housing market by making home buying easier. But the Fed’s plans for the program change in response to new statistics on housing, employment and other economic indicators: The recent upswing in job growth had officials talking about scaling the project back, while a slowdown in housing starts prompted speculation that it might need to be ramped up.

For now that means that interest rates are likely to continue at relatively low rates, though not at the record low levels seen in late 2012 an early 2013. That’s good news for borrowers and fuels an uptick in home buying, as new purchasers are able to get a foot in the door of homeownership.

But conflicting trends in mortgage lending may make that possibility less clear. On the one hand, mortgage approval rates are down, thanks to tighter lending standards imposed by new consumer protection acts and more oversight of those major lenders implicated in fraudulent practices. New protocols like the Qualified Mortgage Rule are intended to keep lenders from setting unqualified borrowers up to fail with loans they’ll most likely default on later.

On the other hand, numerous lenders are flexing borrowing standards to allow former homeowners with a foreclosure or short sale on their credit reports to try again. They’re offering a variety of homeowner assistance programs to help struggling borrowers with refinancing and other options to stay out of default. And now, according to a new Business Insider report, it appears that the subprime mortgage market is rearing its head again, along with risky no-interest loan products designed to entice unwary borrowers.

Housing industry experts lay much blame for the housing collapse on the subprime lending frenzy, when credit was easy and lenders offered mortgages with no interest or even negative interest to marginally qualified, or subprime, borrowers. Now, some fear that the new upswing in loans to borrowers with less than optimal credit combined with those artificially low interest rates will create a new kind of crash once the Fed’s intervention slows and rates begin to rise naturally.

That’s where consumer protections under the Dodd-Frank Act and others come in. By trying to screen out unqualified buyers in the first place, these rules, advocates say, help to keep the market healthy and spare unqualified buyers from failure later. Bit those efforts are undermined by the persistence of risky loan products offered to less qualified applicants.

On the whole, it’s still a good time to buy. But for investors planning to build wealth in income property, Jason Hartman’s recommendations are especially important today: learn, stay informed and get the best investing advice possible to negotiate these muddy waters. (Top image:Flickr/St-A-Sh)

The Qualified Mortgage Rule: What Does It Mean for Investors?