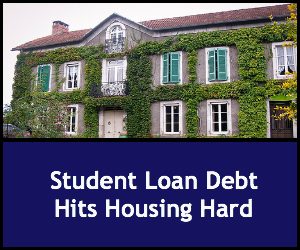 Students aren’t the only ones hit hard by the cost of a college education. The staggering burden of student loan debt affects just about every area of the economy – with troubling implications for the still struggling housing market – and investors building wealth through income property.

The “housing recovery” has been in the headlines since the catastrophic crash of 2007-2009. Thanks to better oversight of lenders and more protections for consumers as well as an upswing in other areas of the economy, the US housing market has been creeping toward stability. It’s a key indicator of the health of the economy overall, along with employment and consumer purchases of all kinds.

So it’s not surprising that the debt load carried forward into employment by new and recent graduates hits all those areas of the economy – as well as the personal lives of those graduates and their families.

It’s no secret, too, that student loan debt is on the minds of financial experts and market observers. As of the end of 2013, that debt – for students in all kinds of higher education programs- totaled over $1 trillion. And since the typical graduate of a four-year university program leaves school with an average of $21,000 in outstanding student loans, that debt can impact virtually every area of that new graduate’s working life.

Recent figures reported by CNN Money reveal that among “millennials” – that large generation of Americans between the ages of 20 and 40 – student loan debt is to blame for an 8 percent drop in home purchases. That may not sound like much, but it translates into about $83 billion in home buying transactions nationwide.

Homeownership in general is down in the US, falling to around 64% — the lowest numbers in nearly two decades. But among that millennial demographic, it’s even lower, falling to 29% in 2014.

What’s more, about 6 million US households pay $250 or more per month toward student loans. And that reduces the ability to buy a home by about $44,000, according to industry watchers. For those with hundreds of thousands of dollars in debt, payments are even higher.

Some buyers can’t make payments at all. They’re struggling to find work or working low wage jobs that aren’t connected to the degrees they worked to get. And they may end up living at home or staying with friends just to make ends meet.

Student loan debt is the “gift” that keeps on giving, Even if graduates are lucky enough to land a well paying job in the right field. The debts they incurred while in school are likely to haunt their entire working life. That’s especially true for those who complete long-term high-end studies such as medicine or law. And unlike other kinds of debt such as credit card debt, student loans can’t be forgiven through bankruptcy. They can even dog a student’s family, if any family members agreed to co sign the loans.

Relief Is Available – For Some

The problem is alarming enough to trigger a flurry of efforts to help deeply indebted students through a variety of loan forgiveness and relief bills from Washington, as well as a few limited options offered by individual lenders and schools. But these kinds of relief efforts don’t help all borrowers, and not all the time.

Relief efforts such as the Student Loan Fairness Act are aimed primarily at the holders of the traditional federal student loans, and then only at borrowers with certain income levels, or who have made payments for a certain period of time. And outright forgiveness applies to loan holders in certain kinds of public service professions.

For all these reasons, student loan debt affects every area of borrowers’ lives: where they live, how and where they work, and when (or if) they marry. And all those decisions affect the future of homebuying – and investing.

Though student debtors without a stable job – or those who left school without finishing the degree – may be staying home longer or living in other temporary arrangements, those who don’t are opting for rentals.

Upsides – and Down Ones – for Investors

That’s good news for investors, who face less competition for available homes and a growing pool of potential renters thanks to the crisis. But that picture has its own downside. Student loan debtors may have lower credit scores and less stability in the workforce. And just as monthly loan payments compromise their ability to buy homes, they also limit the amount of rent they can pay.

What does the future hold? College costs continue to rise, with no change in sight. And despite relief efforts, student loan debt continues to affect the lives – and creditworthiness – of millions of Americans. As Jason Hartman says, everybody needs a place to live – but as the nations’ collective student debt continues to spiral out of control, options for today’s new and not so new college graduates may continue to shrink. And that’s worth watching for income property investors throughout the country. (Featured image: Flickr/jeremylevine)