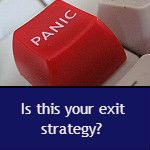 Investing can be a frustrating and seemingly convoluted process, but it doesn’t have to be. Carl Richards, artist and Certified Financial Planner, has made a career of simplifying complex financial concepts through the use of Venn diagram sketches and his book, The Behavior Gap: Simple Ways to Stop Doing Dumb Things with Money. Jason Hartman invited Richards to expound on his investing concepts on episode #303 of The Creating Wealth Show.

What is a Behavior Gap?

As a financial planner trying to help people get ahead, Carl Richards served as excruciating witness to the dumb, repetitive decisions people made (make) with their money. He recognized that emotion too often gets in the way of smart financial and investing decisions. He named this phenomenon – the distance between what we should do and what we actually do – the behavior gap.
His book states, “It’s not that we’re dumb. We’re wired to avoid pain and pursue pleasure and security. It feels right to sell when everyone around us is scared and buy when everyone feels great. It may feel right—but it’s not rational.”

Thanks to his natural talent at at visual communication, Carl excels at making the complex understandable to the 80 to 90 percent of people who are visual learners. The success of his book and in-demand status as an artist and financial expert prove the appeal of his method.

Why do so many people fail at investing? Richards offers a simple diagram to explain. Starting from the bottom, he draws a diagonal line up, then a diagonal line down, and one more up. It looks like a capital N with the top pushed to the right. Looking at it for the first time, the average person might assume it resembles a stock chart, which is exactly what it is.

The top of the first line shows where investors get greedy and buy at the top of the cycle, which is the single worst time to buy. The bottom of the second line is where fear causes the average investor to bail out and sell at the absolute worst time. The caption on this diagram says, “Repeat until broke.” The lesson here is to avoid hemming and hawing and then taking action too late. That’s a behavior gap! That’s why your investing sucks.

Learn from the Circle

The Circle Overlap diagram is another tool Carl uses to to explain how to make better business and/or investment decisions to simplify and supercharge your financial life. You’ve probably seen something like this before. Visualize two circles of the same size. Rather than sitting side by side without touching, they overlap to create an elongated, smaller area in the middle of the diagram.

Too many people spend too much time and energy worrying about either things that don’t matter OR things they can’t control. This is another of those behavior gap issues that screws up investing decisions for so many people.

What You Can’t Control

The following may be self-evident but here are some examples of things you can’t control:

There’s one thing all the previous factors have in common. You can’t do a darned thing about them! Events will unfold in a certain manner whether or not you spend every second of the day fretting about them. Therefore, does worrying about things you can’t control seem like a fruitful behavior? Carl would say, “No.”

What You Can Control

This one is short and sweet. You can control your exposure to financial risk and that reality is more important than anything else that happens in the world when it comes to investing.

The Danger of Being a News Junkie

Perhaps you’ve heard the phrase “analysis paralysis.” Richards traces a large part of bad investment decisions to hesitation or over-analysis caused by paying too much attention to the 24/7 news cycle on cable television. No thinking investor should pay more than fleeting attention to this financial pornography. Think about it for a moment. Do the cable news business channels exist to help you make the best decisions possible? Heck no! Like any other media company, they exist to make money for their advertisers, which means they need as many viewers as possible. How do you snag viewers? Easy. Emphasis chaos, contrariness, and big, bold events that likely have nothing to do with actually profiting from your investments.

Does it pay to be a news junkie? Probably not.

Why Psychology is Important

Carl Richards makes a good point when it comes to understanding why psychology is an important (maybe the MOST important) factor in successful investing. Consider this. Is it difficult to find an investing method? Not hardly! Take a gander through the business section in your local book store. Dozens of “foolproof” methods show you how to make a killing in real estate or the stock market.

Same thing online. There are more courses and memberships than you can shake a live snake at.
The bottom line when it comes to investing knowledge is that there is no Holy Grail. There are a plethora of methods that will work just fine. Strategy is not the problem. The problem is that a single behavioral mistake (greed, fear, etc) can undo months or even years of profitable trading.

Even an average mutual fund can create wealth for you over the long term. Buy and hold worked in the past, it works now, and it will work in the future. The trick is overcoming yourself. (Image: Flickr | Krysten_N)

Ben Mezrich Talks About Why Putin is So Dangerous

Dubious Ethics and Deceptive Practices in the Financial Services Industry