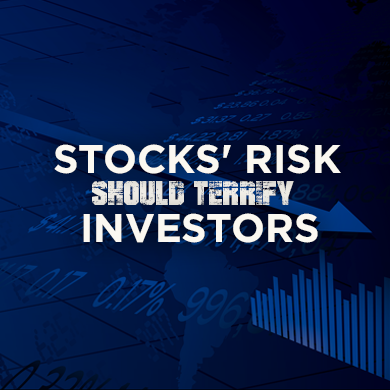 While continued stock market gains may be a source of worry to contrarian investors anticipating a long-delayed correction, if not a full-fledged bear market, bulls point to robust worldwide GDP growth as a fundamental reason for continued optimism. Paul Gambles, co-founder and managing director of Thailand-based research and advisory firm MBMG Group, disagrees. “We’re really terrified,” he told CNBC, adding that the high level of coordinated global economic growth looks to him like a “blow-off top” and that similar scenarios preceded previous financial crises. As a result, he rates the current level of risk faced by investors as “exponential,” per CNBC.

Even as U.S. equity prices have surged to new all-time highs, there is evidence of a widespread retreat from U.S. stocks by the investing public. Since the start of 2012, retail investors have withdrawn almost $1 trillion from mutual funds that focus on U.S. stocks, according to fund tracking firm EPFR Global, as reported by The Wall Street Journal.

The caveat is that much of that money may have been reinvested in equity-based exchange-traded funds (ETF), as part of a long-term trend among investors away from underperforming actively managed funds, and towards lower-cost passively managed index funds and ETFs. EPFR estimates that 40% of that $1 trillion may have moved into equity-based ETFs. If so, the net withdrawal from U.S. stock funds still would be significant, at $600 billion.

Moreover, the number of Americans holding stocks has declined in the current bull market, according to a Gallup survey cited by the Journal. In a poll conducted in early 2017, only 54% of respondents reported owning stocks. By contrast, 62%, on average, had indicated that they held equities in the period from 2001 to 2008, which fell between the bursting of the dotcom bubble and the onset of the financial crisis.

Meanwhile, the Investment Company Institute (ICI) reports that fixed income mutual funds and ETFs have received at least $950 billion of net inflows since 2012, the Journal adds. (For more, see also: Stocks Could Rise As Much As 27% in 2018.)

A flattening yield curve historically heralds slower economic growth and peaks in the equity markets, Barron’s reports. The yield on the two-year U.S. Treasury Note recently rose to 1.97%, while that on the 10-year T-Note moved slightly upward to 2.47%, per Barron’s. The former is most sensitive to expectations about short-term rates, and the futures markets are pricing in an 80% likelihood that the Federal Reserve will increase the fed funds rate by another 0.25% in March, from its current target range of 1.25% to 1.50%, according to the publication. (For more, see also: How The Fed May Kill The 2018 Stock Rally.)

Nonetheless, data from the American Association of Individual Investors (AAII) and Investors Intelligence indicate “that the bullish sentiment is certainly euphoric,” as Peter Boockvar, chief investment officer at New Jersey-based Bleakley Financial Group told Barron’s. Indeed, he adds, the Investors Intelligence weekly report on market advisors has been registering 60% bullish sentiment for the longest stretch in its 50-year history.