Stagflation — A Blast From the Past for Today’s Economy? 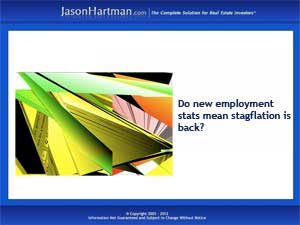 It was an unpleasant word when it was coined back in the seventies, and that’s still true today. But some economists fear that stagflation _- that hybrid of stagnation and inflation that raised its ugly head fur decades ago may be returning to haunt the emerging economic recovery But while the return of stagflation spells trouble for the economy as a whole, inflation isn’t a bad thing for income property investors.

By a number of benchmarks, the US economy is doing pretty well, regaining its health after the housing collapse and a slump in jobs. Housing and employment figures are up and the Federal Reserve is contemplating an end to its massive stimulus efforts. But according to a recent article posted on The Street, optimism about job growth may be premature –and based on flawed data.

Although official data put the July 2013 unemployment rate at 7.4%, down from 7.6% in the previous quarter, there’s another number that bears watching: the labor force participation rate. But there’s another employment index worth looking at. Because some discouraged job seekers have simply opted cut of looking for “traditional” employment, the labor force participation rate also shrank in that time period – from 63.5% to 63.4% and more workers have gone from full time to part time status

Add to that the fact that a certain amount of inflation appears to be a given in the current economy. The Federal Reserve now states that its “goal” for inflation is 2% while acknowledging that the actual rate could run much higher. Combine those two factors, a stagnant job market buoyed by the wrong figures and expected inflation, you get stagflation.

But although the employment figure may raise some questions about the actual strength of the economic recovery, inflation, as Jason Hartman points out, isn’t’ necessarily a bad thing for income property investors.

As the value of the dollar goes down in a period of inflation, so does the value of debt. Though the rate of inflation may not be precisely predictable, its effects may be. That means that the amount owed on a 30 year fixed rate mortgage of the kind Jason Hartman recommends actually declines relative to its original value.

Employment figures may not tell the whole story, and as the economy continues to rebound even in modest ways, predicting inflation rates isn’t easy. But even as economists worry about stagflation, inflation itself offers a hidden boon for investors that may save money on one of the best kinds of debt to have.  (Top image: Flickr/rieh)

Is the Mortgage Interest Deduction in Jeopardy?