Some Threats to the Economy Are Out of This World 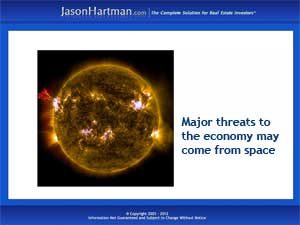 The recent spate of natural disasters – superstorms, tornadoes, earthquakes and floods – has homeowners and property investors throughout the country checking their insurance policies and talking to their lenders about how to recover. But, as recent news reminds us, the biggest threat to the economy – not to mention a little thing like the planet – may come from space. And while there’s not much we can do about that, it’s a reminder to take the actions we can to protect assets and investments.

In 2013 alone, the Earth has been buzzed by several asteroids, one big enough to sport its own moon. Any of these could cause massive damage – and the worst-case scenario predicts worldwide climate change. That’s not a remote possibility, either: thanks to Russian dash cams, the world was able to see what a meteor strike looks like. And moon watchers in March 2013 might have seen the flare of an impact on the lunar surface.

More than that, though, the Sun’s latest geomagnetic storm cycle reminds us that massive solar flares can create widespread havoc on computer and navigation systems worldwide. That’s not just speculation, either. A recent article in the National Journal detailed one such storm, recent enough to be thoroughly recorded.

In 1859, fierce solar storms sent enough radiation into the Earth’s atmosphere and the planet itself that telegraphs ran off the energy output and the aurora borealis was visible as far south as the Caribbean. Those storms, say astronomers and weather watchers, are extreme and rare – but their existence is a stark reminder that in today’s interconnected world, where vital systems depend on sophisticated technology, the consequences could be far more severe.

Changes in the earth’s upper atmosphere also leave us vulnerable to space weather. Holes in the ozone layer open the way for harsh radiation to reach Earth’s surface, bringing harm to humans and other surface dwellers.

Any of these events have the potential to damage infrastructures the world over and cripple economies large and small. Experts point out that at this time, real solutions such as deflecting asteroid orbits or shielding the planet from space radiation remain in the realm of science fiction. But improved monitoring and detection of events like solar storms can help minimize the damage. And, they say, increased public awareness that we live in an active universe could encourage cooperation and more commitment to reducing human contributions such as greenhouse gases.

What’s an investor to do? The words of the old Serenity Prayer implore God’s help to accept what can’t be changed, change what can be changed – and for the wisdom to know the difference. That’s a point echoed by Jason Hartman’s key recommendations for income property investors: stay informed, keep control of your investments, and be proactive about protecting them.

We may not be able to duck am asteroid. But the possibility reminds smart investors to take Jason’s advice and review insurance policies, make needed repairs and learn from experts– ways to protect investments from whatever in the world might happen. (Top image: Flickr/NASAGoddard)

Source:
Chakshi, Ninaj. “The Bggst Threat to the Economy Could Come From Outer Space.” The National Journal, 15 Jun 2013

Cash and Carry in the Housing Market