Some Real Estate Tax Breaks Are Gone for Good 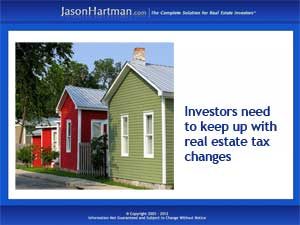 If it’s January, can tax time be far behind? Even though income property investors can still take advantage of a long list of tax breaks, 2014 ushers in some real estate related tax changes that may eliminate some longstanding deductions and change the eligibility thresholds on others. Although final decisions are yet to be made by a government determined to enact major tax reform, here are a few points to watch for in the coming year.

Deductions for Mortgage Insurance Premiums
Mortgage interest has long been a cherished deduction for property owners, and that appears to be safe for now. But for the last few years some property owners have also been able to take deductions for their mortgage insurance premiums, if that insurance comes through agencies aimed at helping lower income purchasers, such as the Department of Veterans Affairs or the Rural housing Service. Some privately purchased insurance could also be deducted. But December 31. 2013 was the deadline for claiming the deduction—and it doesn’t seem likely that this one will return in upcoming tax reform packages.

Exclusion of Debt Forgiveness
Since the housing crash of 2008, tax and lending laws have changed to reflect the realities of the collapse, including the massive numbers of foreclosures and short stales taking place all over the country. One of those changes was the exemption of housing-related debt, allowing homeowners to exclude up to $2 million in debt forgiven by a lender for a foreclosure or a short sale. If not renewed, this exemption won’t apply to any debts discharged after the end of 2013.

Tax Credits for Energy Improvements
Until he end of 2013, property owners were allowed to take a maximum lifetime credit of $500 for energy efficiency improvements in primary residences – including areas being rented out. But unless Congress changes its mind, that credit no longer applies.

Other parts of the real estate related tax code that are no longer in effect involve commercial real estate and expensing deductions for business activities. Some credits previously available to contractors and home builders for new home construction are gone in 2014, too.

A number of government committees are taking a hard look at taxation as part of a long-term plan to overhaul the tax code, so more changes affecting property owners and investors are likely. But even though some tax breaks have been wiped from the books, many still remain – another reason, as Jason Hartman points out, to invest in income property.  (top image:Flickr/gorogen)