Ron Paul: Crazy Like a Fox With Libertarian Beliefs? 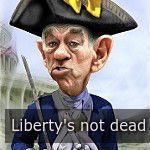 As a long time fan of liberty and capitalism, Jason Hartman welcomes to episode #315 of The Creating Wealth Show a long time voice of these founding American principles, Doug Wead.

Doug Wead has served beside some of the greats in modern American politics. He has been close with and written books about several “First Families.” Doug’s work has been praised by everyone from Lady Bird Johnson (wife of former president LBJ) to former Congressman and Presidential Candidate Ron Paul, whom he served as a senior adviser in the 2012 Republican Presidential Primary.

Doug was an adviser to both Ronald Reagan and George H. W. Bush, and also worked with George W. Bush for years leading up to his Presidency. Wead has also enjoyed an illustrative publishing career, having written more than 30 books. His interviews with six presidents and first ladies, nineteen presidential children, and twelve presidential siblings, his writing is famous for primary source information.

During the 2008 presidential debates, then Congressman Dr. Ron Paul impressed Doug Wead with his non-interventionist foreign policy platform, drawing him away from the “old right wing” he had served and written about dutifully for decades. As a senior adviser to Dr. Paul during the 2012 presidential campaign, he became a CNN, MSNBC, and Fox News regular where he defended Paul’s foreign and monetary policy.

Since the end of the 2012 election cycle, Doug Wead and Ronnie Paul Jr., eldest son of Dr. Paul, have teamed up to form The Liberty Networking Project. They are dedicated to providing those in the self-dubbed “Liberty Movement” with an opportunity to profit from the unprecedented level of net-based enthusiasm and connectedness created by Congressman Paul’s grassroots campaign appeal.

For those old enough to remember the year 1980, California Governor Ronald Reagan decided to challenge President Jimmy Carter, who was riding low in popularity after what was generally considered to be an ineffectual first term in office. Still, as a former movie star best known for acting opposite a chimpanzee in Bedtime for Bonzo and divorcing first wife Jane Wyman, few pundits gave Reagan much of a chance to dislodge a sitting president.

After losing the Iowa caucus to George H. W. Bush by a few percentage points, no major publishing company was interested in writing a book about the man from California’s campaign, which all assumed would be a short and insignificant effort. In walked Doug Wead. He agreed to write the book and the rest is history.

How He Adopted Libertarian Beliefs

For most of his adult life, Wead was a card-carrying member of the mainstream Republican Party. But then Ron Paul changed his life. The Congressman appeared on television talking about the real reasons behind the 9/11 attacks and why America is so poorly perceived around the world.

During his remarks, Paul mentioned that the Federal Reserve spends more money than Congress. Could it be true, Wead wondered? He went directly to Google and found that the claim was true. While Congressman Paul went on to demand an audit of the Federal Reserve, Wead realized he had just experienced an ah-ha moment. Out with the old belief system and in with the new.

Jason brings up the question of whether America’s wealth is real or fake? Is wealth accumulated by stock market speculation really wealth at all? Wead points out that the poor are in the process of being wiped out by inflation and hidden taxes; the wealth of a nation is disappearing.

He goes further in saying that America remains wealthy because, despite intentions to downsize from a succession of presidents, it has power. How does 43% of the world’s military expenditures sound? Like a pretty good reason we remain in the catbird seat, right?

War is Good for Business

A good chunk of that 43% is spent on private contractors who build the machines and weapons of war, sometimes for both sides of the same conflict. Don’t ever doubt that this is big business, kiddies. With profit as the driving motive, don’t expect there to be peace. As Jason likes to say, what gets rewarded, gets repeated. Peaceniks, you’re wasting your time.

Following the war discussion, Wead makes the point that the real problem is not, and Congressman Paul realizes it, the Federal Reserve but rather human nature. Phrased differently (spoken by Jeff Goldblum’s character Dr. Malcolm in Jurassic Park), nature will find a way. Even if the Fed were to be instantly and completely dismantled, capital cronyism will emerge somewhere else to take advantage of the populace. The best we can do, according to Wead, is cut the head off when we can and force it to stay on the move.

Largely dismissed as a kook when he appeared on the scene and challenged for the Republican  presidential nomination in 2008, Paul’s unwavering dedication to espousing his principles has slowly but surely moved Libertarian ideas closer to the front burner.

As his son, Kentucky senator, Rand Paul, throws his hat into the fray for the 2016 nomination, it’s obvious the media has decided to accept the younger Paul’s brand of pseudo-libertarianism as almost legitimate. That’s progress.

Breaking Down the Doctor’s Words

Does the good doctor go too far towards isolation? Wead says that he may not be as isolationist as portrayed in the mainstream media. According to Wead, Paul’s views have never been completely or accurately explained. He does not, as popularly claimed, want to end the Federal Reserve, but would prefer to have it phased out eventually, after first auditing it and makes its operations transparent.

In closing, Wead noted that bloody Russian dictator, Joseph Stalin, had approximately one million people in prisons when he began executing them in a great purge. Modern America has more than a million prisoners right now, many confined due to non-violent drug offenses. Paul, like many libertarians, believes we should consider drugs a social rather than criminal problem. Doe these ideas sound like the ravings of a lunatic mind? (Image: Flickr | DonkeyHotey)