Building a market comparison between New York and Denver places the world’s financial capital up against the main commercial hub of the rocky mountain region.  When considered from an intuitive perspective, most people would show a strong preference to New York.  The reason for this is obvious … everybody reads about New York in the news, and sees the city on television nearly every day.  However, as intelligent investors it is important to understand that there is a major difference between a market we know about and a market that is good for investment. 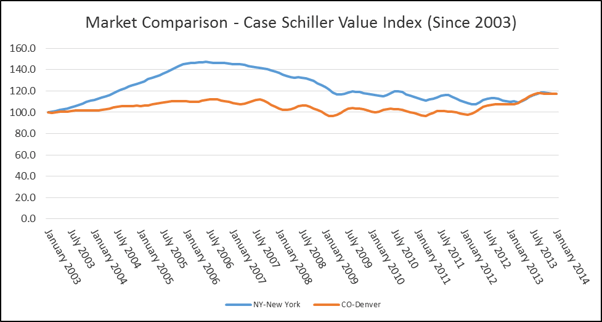 When comparing New York against Denver as investment markets, there are marked differences that create the estimated ROI profiles for each city.  This first characteristic involves the trend of price movements.  New York is a highly cyclical market, with prices escalating significantly at certain times and crashing at other times.  Conversely, Denver is a highly linear market with prices moving along a relatively flat trajectory with a slight upward tilt.  Another key difference between the two markets is the rate of cash flow that feeds into the estimated ROI.  New York is well known as a very expensive place to live.  It is also a very expensive place to own investment property, and frequently creates significant negative cash flows for investors since rents tend to be very low relative to prices, and costs tend to be very high relative to rents.  Denver has recently encountered a growing population that has placed upward pressure on prices that has not rippled through to rents.  The result is a slightly negative estimated cash flow for the city. 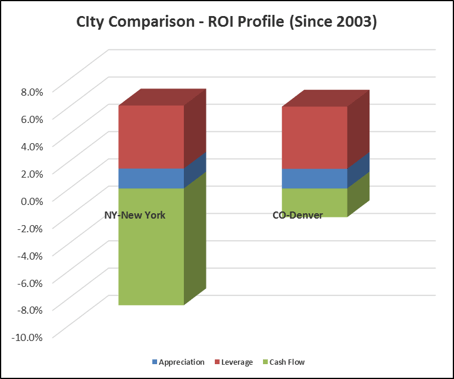 By starting from a 10-year time horizon, we see very different price trajectories for the two cities.  Market prices in New York escalated very rapidly during the mid 2000’s, then encountered a steep decline during the credit crisis.  In the aftermath, prices in New York have generally moved sideways without the resumption of another major uptrend.  On the other hand, prices in Denver have been very linear over this same time horizon.  Prices edged up slightly during the credit expansion, and down slightly in the credit crisis, but have moved into an uptrend over the past couple years, driven by continued  population growth.

The estimated ROI profiles tell a similarly interesting story.  New York has experienced a roller coaster ride of price increases, price decreases, and gyrations along the way to the current price levels.  Unfortunately, the aggregated leveraged price appreciation has not been sufficient to offset the estimated negative cash flows.  The next result is an estimated ROI of -2.5% for investment property in New York.  Alternatively, Denver moved sideways until its recent uptrend.  The linear nature of the market has provided the opportunity to benefit from modest leveraged appreciation that is sufficiently high to offset the modest estimated negative cash flow and generate an estimated ROI of 3.9% over the time horizon. 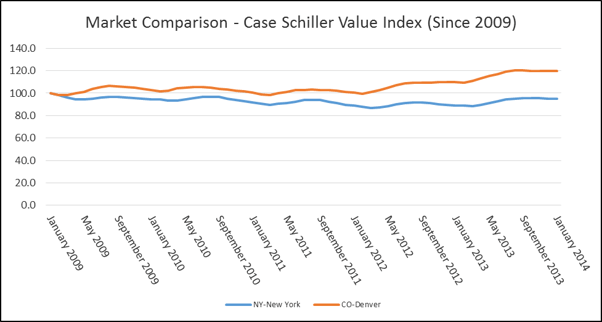 When we shift the time horizon forward, and adjust the purchase date to 2009, the impact on our story becomes very interesting.  Most people would intuitively think that a cyclical market such as New York would be highly favorable if the purchase were timed after the financial crisis bottom.  This is most certainly true for some other market areas, but has not been the case for New York, as prices have been  flat from January of 2009 through January of 2014.  Conversely, Denver has appreciated by approximately 20% over this same timeframe.  As a linear market, Denver has not historically appreciated rapidly.  However, astute investors can capture benefits from sustained modest price appreciation that are typical of markets such as Denver. 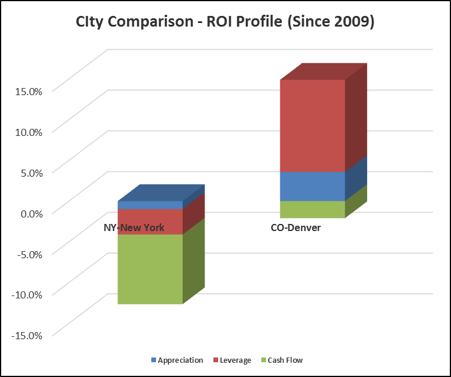 Extending these impacts to the estimated ROI calculations creates a highly intriguing profile for each market area.  When looking at the estimated ROI for New York since 2009, we encounter both negative estimated cash flow and negative leveraged price movement that result in an overall estimated ROI of -12.7%.  This is very surprising, since most people would think that buying into a market like New York after the credit crisis would be a formula for rapid gains.  One the other side of the ledger is Denver.  The steady uptrend in prices results in leveraged appreciation that offsets the modest negative estimated cash flows to arrive at a total estimated ROI of 12.8% since 2009.

What this comparison shows us is the danger of following conventional wisdom.  Many of us have heard the adage to “buy low and sell high” and consider it to be sound investment advice.  The problem is that you don’t know in advance when something that is “low” will move higher.  Sometimes it will stay flat, and sometimes it will keep moving lower.  People who invested in New York trying to “Time the Market” after the financial crisis have experienced significant difficulty over the past few years.  A more intelligent approach is to target investment market areas that are fundamentally solid, and are on a long-term linear growth trajectory.  This will place time on the side of the investor.  In general, it is usually better to invest where time works in your favor, instead of working against you.