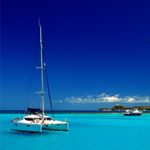 The Skinny on Necker Island

Necker Island is a 74-acre swath of paradise located in the British Virgin Islands. It is owned by Richard Branson, Chairman of the Virgin Group of companies and well known globetrotting billionaire. As you might imagine, it is a swank slice of tropical beauty. How does one go about wrangling an invitation (if you’re not a celebrity) to be wined and dined by Mr. Branson? Easy. Donate $40,000 to his charity and you’re in. In case you’re wondering, that’s how Jason did it.

Getting to Necker Island from Jason’s home base in Phoenix is no small feat. He flew to San Juan, Puerto Rico, took another flight to the British Virgin Islands, then a ferry to one island, and finally a boat out to Necker.

Jason was accompanied on his trip by a group of entrepreneurs (including uber information marketer Yanik Silver) who had also paid handsomely for the privilege. In recounting his travel experience to Steve on episode #314 of The Creating Wealth Show, the prevailing overtone is -there’s no other way to say it – FUN!

There were exotic animals, an odd collection of Olympic games, Richard Branson himself dancing in a kilt across the table without kicking over a single drink, and guests dressed as their favorite superhero. Did we mention the full time staff of 65 on hand to tend to a guest’s every whim (almost) and a private label champagne awaiting them at the hot tub party? The only thing missing was Robin Leach.

Next Door to Mosquito Island

One of the more interesting activities Necker Island guests were privileged to was a guided tour of the nearby Mosquito Island, also owned by Branson. His goal is to make it the first 100% self-sustainable resort in the world. We wouldn’t bet against the man. Entrepreneurs seem to have the ability to succeed in solving problems that all the governments in the world can’t figure out.