Reverse Mortgages Create a New Round of Foreclosures 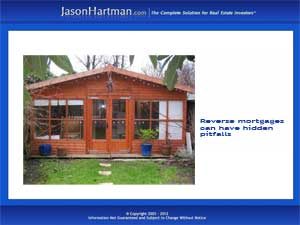 On paper it sounds good. Take out a “reverse mortgage” that draws on home equity to release cash for daily living and other expenditures. For many, particularly those in retirement and beyond, the plan offers financial relief while leaving the original investment secure for the owner’s lifetime. But, according to a new CNBC financial news update, loopholes and fraudulent practices in the reverse mortgage business are creating a new round of foreclosures.

Reverse mortgages have been around a while, often sold to older, cash-strapped people who, due to age and infirmity, might not be spending much more time in their homes anyway. Now, though, as more people head toward retirement with limited savings and large amounts of debt, this arrangement is being touted as a way to have that dream retirement anyway by tapping into an existing asset.

Like regular mortgages, reverse mortgages require an arrangement with a lender. The homeowner is generally responsible for property taxes and other usual homeowner expenses as well as mortgage insurance. When the home is sold or the mortgage holder dies, the proceeds return to the lender.

But loopholes apply. In general, the older the borrower, the less risk a lender assumes. So couples in which one partner is significantly older may be advised to put only the older member’s name on the title in order to get the loan. The other party can always be added later, they’re told.

That may not happen, though. If the title holder dies, or the couple divorces, the surviving spouse has no title to the home and could face eviction and foreclosure unless he or she is able to come up with the money to hang onto the house. And a homeowner who does need to sell may find that the house is now worth less than the loan – and there’s no equity to fall back on.

CNBC’s Diana Olick reports that nearly 10 percent of reverse mortgages are now delinquent – a much higher rate that the overall delinquency rate for mortgages in today’s market. And although lenders continue to market reverse mortgages to that retirement age population, their appeal depends on current home valuations –when they’re low, fewer people are wiling to take the option

Even with the potential problems, lenders say that a reverse mortgage can make sense for some. And the fact that applicants must appear before a HUD-approved counselor in order to get the loan approved demonstrates that safeguards are in place. Still, eldercare advocates worry that these loans are being marketed too aggressively to a vulnerable population as the answer to all financial difficulties.

In any case, failed reverse mortgages have implications for income property investors: more foreclosures on the market, and potentially new renters in the ever-expanding pool. But with Jason Hartman’s recommendations to be educated and aware, income property investors can stay ahead of whatever curves the housing market has in store.  (Top image: Flickr/tomhoops)