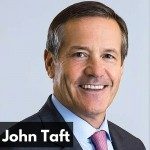 John Taft joins Jason Hartman for episode #628 of the Creating Wealth to discuss Wall Street and the future of investments. Taft is the CEO of the Royal Bank of Canada’s Wealth Management Division, and that’s RCB Wealth Management. His book is entitled A Force for Good: How Enlightened Finance Can Restore Faith in Capitalism.

Jason opens the show talking about enlightened finance and capitalism. Hopefully the world will see it’s the way to go. It is good for society, it’s good for everybody in society. Results will be unequal. Opportunity should be equal, but results will always be unequal. Some people are more ambitious, some people are more talented, some people are just luckier, and Jason believes luck is something that exists. Capitalism, it’s not perfect by any means, there are many unfairness’s in the world. It is dangerous how powerful these big corporations have become.

Taking money out of politics

Jason said it’s crucial to get the money out of politics. If we make the government smaller then there will be less lobbying. There will be fewer special interests. There will be less influence. If money didn’t matter or if the size of government didn’t matter, why would all the money be chasing government and trying to influence government. If government were smaller and regulations were fewer, less money would be chasing government. The reason the money chases the government around and all these politicians to buy off all these crooks in Congress is because that’s where the money is, it’s where the treats are, it’s where the favoritism lies. Make government smaller and you’ll have less of that. It’s really quite simple, but amazingly everybody wants their little special interest, their little corner of the world, so that’s what we have. We have what we have.

John Taft, CEO of RBC Wealth Management joins Jason. Task is the author of A Force for Good, How Enlightened Finance Can Restore Faith In Capitalism, and Stewardship, Lessons Learned From the Lost Culture of Wall Street. He’s also the great-grandson of president and chief justice William Howard Taft.

Jason kicked off the discussion asking why Wall Street is important to society.

John said we can’t even begin to imagine a modern economy without a financial system, and it’s integral in so many ways to the system of financial capitalism that today, not just during our lifetimes, but since the start of the twentieth century has become the dominant socio economic model in the world. It relies on, it’s powered by finance, and all the things that we want to get to from our economic system require a financial system that supports it, so that’s why the financial services industry and financial markets and financial system is important to us.

The history of Wall Street

John talked about the history of Wall Street.  Let’s remember Wall Street is just a word people use to describe the financial system. Most of what people mean when they say Wall Street isn’t on Wall Street. Most of the financial institutions in our country are out of New York State, spread across the country, and there are tens of thousands of community institutions, but when people say Wall Street they mean the financial system, and throughout its history it has strayed from time to time from its underlying mission, purpose and values which should be to support economic growth and makes everybody better off than they would be without the financial system. The most recent example of that of course was the financial crisis driven by excessive leverage, most of it in the housing sector, but as you point out there have been other examples where Wall Street gets off the track, forgets what its supposed to be doing for society and starts focusing on things that lead to dysfunctional behavior.

Jason said he doesn’t think Wall Street is very capitalistic because with all the regulation that goes on that is ostensibly to protect the little guy, what that does is limit the playing field and keeps new entrants out and makes the market less free and more monopolistic. But I don’t think anybody goes to Wall Street thinking their going to help society.

They were true centers of stability, the banks now, all of them made money during the financial crisis. None of them even cut their dividends, much less went out of business, so concentration and size isn’t the problem. The problem is the stewardship concept. Why do financial services institutions exist. Do they exist to make money for their employees? No. Do they exist to make money for their shareholders? Yes, but that takes second place actually to serving a social purpose. Canada—they remembered that and the US, they forgot it.

John said equities are a good investment. We don’t see a recession, at least not in the United States. The other is interest rates might go up—don’t extend out too far in terms of maturities and don’t go down in terms of quality, stay relatively short and stay in high quality fixed income. Don’t be afraid to invest in the equities market. You will get paid over time if you do so today.

Bobby Monks-Uninvested, How Wall Street Hijacks Your Money & How to Fight Back