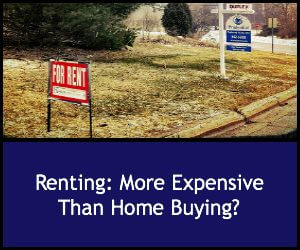 Rents keep rising in a robust rental market. And while that’s good news for income property investors and the recovering housing market in general, spiraling rents are causing major changes in the demographics of the US housing market.

According to new data from the real estate database Zillow, by the end of 2014, the cost of renting a house was about twice the cost of owning one. In a nationwide survey of housing costs, it turns out that renters paid out on average 30 percent of their monthly income on housing, compared to just 15 percent paid out for mortgage payments by home owners.

As the housing market rebounds after the crash of a few years ago, Zillow’s data gives new life to the old debate about whether it’s smarter to buy a house, or to rent one. It’s a debate whose answers depend on a larger context that includes factors like the state of the economy and even changing attitudes toward home ownership and renting.

The US housing landscape has undergone some drastic changes in the last decade or so. Pre-2000, renting was clearly cheaper than owning a home in most markets, even big cities like Lo Angeles and New York. But in the run-up to the bursting of the “housing bubble” in 2008, all that started to change.

Home buying was suddenly accessible to everybody, and lenders offered hopeful homeowners mortgages at astonishingly low introductory rates.It was possible to qualify for a mortgage with poor credit or even no credit. One lender boasted about closing a housing deal by phone with a prisoner in a state penitentiary. Under these circumstances, homeownership was a viable alternative to renting – and many took the plunge even though they didn’t really understand what they were getting into.

Flash forward to 2007-2008, and those initial low mortgage payments had ballooned to twice their size or more. People who expected to make those payments suddenly couldn’t – and the defaults began. Foreclosures followed, masses of them that ruined homeowners’ credit and made it all but impossible to start over with another mortgage.

After the crash, it was perhaps inevitable that there would be calls for reforming the mortgage lending industry and for finding ways to protect consumers from predatory lending – and from themselves. The Dodd Frank Act and similar legislation imposed penalties on lenders whose loans didn’t conform to new, tighter standards. Housing started to slowly rebound, with rising home prices and the slow but steady movement of foreclosed homes through the system.

But thanks to those new lending standards and other economic factors, home buying stayed relatively flat. The nationwide rate of home owners hovered at its lowest levels in two decades as fewer people qualified fro mortgages under the tighter rules. Others, even if they qualified, couldn’t make the necessary down payments. In a struggling job market, potential homebuyers simply couldn’t save enough or remain stable enough to commit to the buying process.

And that meant a strong surge in rental housing. Those people who simply couldn’t afford the down payment and other costs of buying a home joined the growing rental pool that included those former homeowners whose creditworthiness tanked in the housing collapse, and the growing demographic groups of the millennial and those over 65.

Renting was a necessity for some of these groups and a choice for others, but the surge of demand for rental housing in markets across the country pushed rents higher and higher.

Now, according to a recent post from USIHomes, which reports Zillow’s findings about rental costs, the pendulum swinging back. As rents rise and eclipse monthly mortgage payments, more people may be revisiting homeownership.

But it’s important to note that Zillow’s stats refer to the costs of renting a single family house as opposed to buying an equivalent one – and it isn’t clear how rents for other kinds of dwellings such as units in multiplexes or apartments factor into the mix. As USIHomes reports, the cost of renting relative to owning a home may actually push some renters into taking the plunge into home ownership. That may be true in particular for the milllennials, those young college graduates facing an unstable employment picture and carrying a lot of student debt.

If they can make a down payment, the theory goes, this group may well opt to buy a home. But for other groups in that large tenant pool, buying might not be an option. Although mortgage interest rates are still staying relatively low, the new standards for qualifying are still in place, with factors like an applicant’s debt to income ratio and overall creditworthiness considered along with the presence of available cash for a down payment.

It’s no secret that homeownership brings with it a host of perks, starting with leveraging the power of a mortgage to keep savings secure – all the way to the many tax breaks available to property owners. But in a constantly shifting housing landscape, renting is still the option of choice – or necessity – for many. And for investors following Jason Hartman’s guidelines, that means new opportunities to build wealth from income property. (Featured Image:Flickr/danielmoyle)

Source:
Yen, Jay. “Renting is Now Twice as Expensive as Buying Houses in the US.” USIHomes. usihomes.com. 29 Dec 2014