Renters Will Be Renters – Not Home Owners? 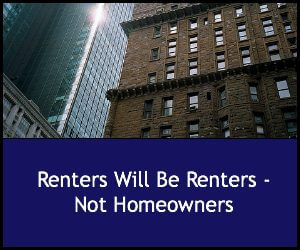 Time was, renting an apartment – or maybe a house – was just a temporary arrangement until you saved up enough to buy your very own home. But for a growing number of today’s renters, that scenario just doesn’t appeal – and that trend has big implications for investors in rental real estate.

According to recent statistics reported by Business Insider, at the end of 2014, only 14.7 percent of tenants moving out of an apartment did so because they were buying a home. And in the years since the housing collapse of 2008, the percentage of renters moving out to buy a home of their own has stayed under 17 percent.

Those figures come at a time when the US homeownership rate overall is at its lowest point in over two decades – just 64 percent. And of those homeowners, only 29 percent are first time buyers – a group essential to the continued recovery of the housing market.

In the years since the housing crash, rental markets have surged even as home buying rates fall. To explain why, real estate professionals look once again to the millennials, those young people born between the mid 1980s to around 2000.

The average age of the first time homebuyer is around 30. In the traditional model of American adulthood, that would be the age at which a n individual has finished school, settled into a steady job, and is getting ready to marry and start a family. But in today’s volatile economy, that model just isn’t working for many new and recent college graduates.

Faced with student debt and an uncertain employment picture, many of these thirtysomethings fear being tied to the long-term commitment of a house. For many, job security is an issue. A recent college graduate may have to move across the country to start a career – or halfway around the world.

For others, debt and low income make getting a loan more difficult. Even though lending standards have loosened in an effort to encourage more new buyers, affording a down payment and convincing a bank that you’re mortgage material can be difficult.

But that’s assuming of course that there’s a house to be bought. The inventory of available houses for purchase remains low in many markets around the country, and that shortage is especially acute for “starter” homes that first time buyers can afford in areas they want to live in.

Established homeowners aren’t selling those homes and moving up to more lavish residences. Many are watching home prices rise in hopes of selling at the house’s peak value; others are enjoying good refinancing deals at low interest rates and don’t want to risk a capital gains penalty for selling.

For all those reasons and others besides, today’s renters just aren’t moving out of rental housing to a house they’ve bought. As Business Insider reports, a recent survey of reasons renters moved out of apartments found that the percentage of renters surveyed who did that peaked in 2004 – well before the housing crash of 2008.

Today, the numbers of renters leaving to buy a home continues to fall – lagging behind other reasons such as rent increases, job changes, and even evictions as reasons for leaving their current housing.

Most renters in the survey opted simply to move to another rental residence of some kind, either in the same or a different city. And those numbers don’t appear likely to change any time soon – a trend that worries real estate market watchers who fear that the continued slowdown in homeownership, especially among those prized first time buyers, could stall the housing recovery and by extension the economy as a whole.

But the low homeownership numbers and the reasons behind them continue to feed a flourishing rental market, where rents continue to rise and even rental housing in desirable areas becomes scarce. And even though some renters opted to move just because rents were rising too high in their current rental, they chose another rental, not a house carrying a mortgage payment that might be lower than rent.

In spite of the best efforts of the mortgage and housing industries to change them, the twin trends of low interest in home buying and the limited availability of homes to buy mean that renters will be renters – and for investors taking Jason Hartman’s advice on building wealth in real estate, that means a rich pool of tenants for the long term.  (Featured image: Flickr/Edenjanineanded)

What’s Behind the Housing Shortage?