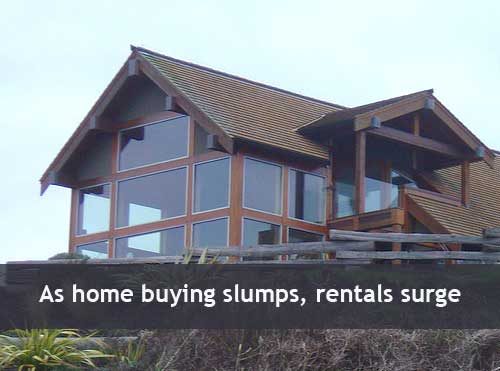 New statistics show that homeownership is falling to the lowest levels in years. At the same time, rental housing is surging. Thanks to a complex interplay of factors including income, mortgage lending standards and the changing demographics of American society, it’s a good time to invest in rental real estate.

The housing market has been struggling toward recovery in the years since the real estate collapse for 2008. By many benchmarks, it is recovering. Still, many Americans just aren’t buying houses. They’re locked out of the market because of income or credit issues – and some are even former homeowners who lost their houses to foreclosure in the crash. Still others just don’t want to buy a house.

Those individuals and their families are contributing to an ever-widening pool of renters – a pool that’s in the process of expanding even more thanks to a surprising shift in American demographics – the rise of the millennial,

We’ve written before about that generation of twenty to thirtysomethings who now make up the biggest age group in the country. Their numbers beat out the previous holders of the record – the baby boomers, whose ranks are beginning to thin due to age. And they’re a bonanza for rental property investors, who can expect to draw renters from this end of the pool for years to come.

The average age of people in this age group is twenty-three. Many are college graduates burdened with student debt, or out of work even though they’re looking. A lot of them live with parents for other relatives. The usual milestones of adulthood are far down the road for these young people.

Thanks largely to those two factors – debt and an iffy employment picture, these millennials aren’t moving out on their own. Or if they do, they’re not interested in buying houses. Mobile and unattached, they’re moving from place to place for work and more study, and they’re marrying much later in life than their parents probably did. What’s more, they may delay having children or skip having them altogether.

And that, say some real estate experts, is the silver lining that salvages an otherwise flattened housing market that’s marked by fewer mortgage applications and less interest in homeowner ship in general. As Jason Hartman always says, everybody needs a place to live – and for large numbers of those late blooming millennials, that place might be the rental property that brings long term wealth for smart investors. (Top image: Flickr/{hilipTaylor)

Welcome to the Biggest Ponzi Scheme in History