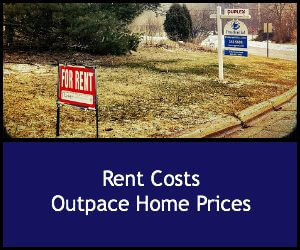 It’s still a renter‘s market, but it’s more expensive than ever to become a renter. As a new article from NuWire reports, in many markets around the country, rent costs are rising faster than home prices. In a time when home ownership is at near-record low levels and renters dominate the real estate landscape, what does the price jump mean for investors?

According to NuWire, in a number of major American markets, rents have jumped 3.7% over the last year, nearly catching up to the 3.9% rise in prices of homes for sale. What’s more, real estate giant Zillow reports that in 17 of the nation’s 35 largest cities surveyed, the annual growth in rental prices actually exceeded the growth in home prices for March 2015.

Though that trend doesn’t hold in many of the country’s smaller markets, it does reflect a number of issues facing the current housing market and their implications for the future, as the availability and cost of housing intersects with current demographics and the financial issues facing both renters and homeowners today.

The current surge in rental housing comes in the aftermath of the much publicized housing crash of 2008, when so many homeowners lost their houses to foreclosure or ended up struggling to pay off mortgages they couldn’t afford. Locked out of the buying process due to bad credit and prior foreclosures, these former homeowners joined the already growing pool of long-term renters.

Another consequence of the housing collapse was a restructuring of regulations governing mortgage lending after the runaway lending spree that put too many ill prepared buyers into homes they ended up not being able to afford. Post-2008 and the scandals that implicated many of the nation’s leading banks, the Dodd Frank Act imposed tighter standards on the mortgage industry. Those standards called for better oversight of mortgage lending and required borrowers to meet specific requirements for down payments and creditworthiness.

But those tighter lending standards locked out a number of potential buyers who couldn’t make those minimum down payments and whose credit was tarnished from prior foreclosures or breaks in employment.

Adding to the decline in home buying: a shortage of homes to purchase in numerous areas around the country, and a general disinterest in homeownership among the nation’s largest demographic group, the millennials, who are increasingly choosing to rent rather than buy homes. Reasons for their choices include debt, a reluctance to be tied to a particular location, and a preference for the amenities of rentals, such as low maintenance, proximity to amenities and flexibility.

Thanks to the renters who might like to buy homes but can’t, and those who could buy homes but don’t want to, homeownership rates are down to around 63%, the lowest in over 20 years – and the demand for good rental housing continues to soar, along with rents.

The rise of median rents is good news for investors, who stand to make more from competitive rent prices from relatively high-earning tenants. But roughly twice as much of a renter’s monthly income goes to housing, as does a homeowner’s. And as rents continue to equal or exceed the costs of buying a home, more renters may find that option more attractive.

Taking out a mortgage at a fixed interest rate could cost less than monthly rent. Homeowners don’t have to worry about getting the bad news from a landlord about annual increases, either – and they can qualify for a long list of tax breaks available to homeowners, not renters.

But renters trying to make a monthly rent payment of a thousand dollars or more may not be able to save enough for a down payment on a home, assuming that there are homes they want to buy. And although some retirees are opting to sell homes in favor of renting, many are opting to hang on to the so called “starter” home rather than upsizing to something more luxurious when careers flourish and finances are healthy.

As Jason Hartman says, everybody needs a place to live. That’s why real estate continues to be an asset that endures. But as both rents and home prices continue to climb, where and how they live may change considerably – and for income property investors, those are trends worth watching. (Featured image:Flickr/donaldbarton)

Investing: 4 Trends for the Future