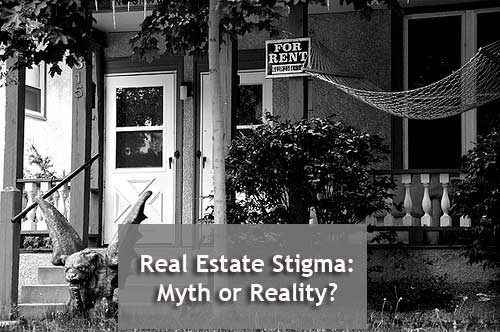 In early August 2014 the St. Louis-area town of Ferguson erupted in violence. Protests over the shooting of Ferguson resident Michael Brown by local police put the community in the news and the spotlight on a little discussed concern for real estate investors: real estate stigma that drives property values down and potential buyers and renters away.

Real estate stigma, sometimes also called housing stigma, comes about when a neighborhood, a street or even one single home in a particular area gets bad press. That can come from natural disasters. The aftermath of Hurricane Katrina from a few years ago is one example. Image after image of devastated homes and blighted neighborhoods hit the news. Home sales went down and the value of homes still standing plummeted. Earthquake and tornado stricken areas might face a similar plight.

But it’s violence, or the perception of it, that has a greater potential for creating real estate stigma. In places such as Ferguson, or the sites of other violent confrontations, manhunts and the like, residents and real estate experts fear that the area’s bad reputation could damage the saleability and rentability of its homes.

There are other kinds of stigma too, such as that associated with a particular property that, left untended, casts a shadow over the whole neighborhood. Abandoned homes, yards filled with junk, can make people reluctant to buy or rent neighboring ones. And the air of neglect can drive down the values of other homes on the same street – or neighborhood. Similarly, if the neighborhood is host to a halfway house for recovering addicts, or a known sex offender, potential buyers might walk away.

Then there are the houses with their own history of violence or horror that no one wants to own. Sites of horrific crimes or rumored hauntings can be a hard sell – just ask the principals in the recent efforts to sell serial killer Jeffrey Dahmer’s childhood home in Ohio.

But do these things translate into long-term damage to an area’s real estate value? Does the notoriety of a neighborhood or even a single home follow indefinitely, with toxic results for the area as a whole? The answer is a resounding maybe.

Some kinds of stigma can ruin a neighborhood’s value by up to 20 percent. If a house is known for drug activity, or a registered sex offender enters the neighborhood, values tend to plummet quickly.

But for violent events, that may not be true. Drawing data from incidents such as the 9/11 terrorist attacks, the 2011 shooting of US Rep. Gabrielle Gifford and six others in Tucson, Arizona in 2011, and the shooting of 26 school children and others in Newtown, Connecticut in 2012, researchers observed that the impact of those things on the value of, and interest in, local property was relatively small.

But other factors that affect the viability of these areas are at play, depending heavily on images shown in the media. Viewers watching coverage of the Ferguson situation saw not just boarded windows but also neighborhoods in decline, reflecting the low incomes and high rates of unemployment in the area. Those watching the Newtown or Tucson dramas unfold would have seen tidy homes in more upscale neighborhoods.

Likewise, the very notoriety of a house or street can attract, rather than repel, potential buyers fascinated by its reputation and eager to have a share in that.

Legal Issues: Disclose or Not?

But whether or not there’s any long-term “stigma” attached to these homes and neighborhoods, there are legal issues attached to transactions involving them.

A Pennsylvania woman famously sued the seller and real estate agent who sold her a home in which a bloody murder suicide had taken place. Her claim, which made it all the way to the state’s Supreme Court, accused the seller and agent of withholding that information from her in the interests of pushing the sale through.

The jury found for the defendants in that case, ruling that sellers and agents have no responsibility to disclose anything that doesn’t actually affect the property in a physical way. The case points up the fact that state laws on stigmatized properties and neighborhoods may vary.

In Massachusetts, for example, sellers must tell buyers if a house night were haunted, or that it might have a psychological impact on residents. But in Virginia, nothing needs be said unless there’s visible evidence, such as bullet holes in the wall. And if an owner has covered up that kind of physical evidence, such as painting over blood spots, there’s no obligation to disclose those details.

For real estate investors taking Jason Hartman’s advice to diversify holdings and maximize returns with low cost properties, the stigma attached to a property or neighborhood could be a red flag for a disastrous venture, or open doors to the deal of a lifetime. And as always, thorough research and careful consideration leads to the right property – stigmatized or not.  (Featured image: Flickr/sawdustphotos)