Real Estate: The Only Private Investment? 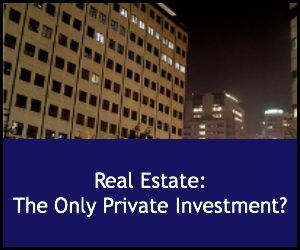 Time was, anybody who wanted a safe and anonymous hideaway for financial assets turned to offshore banking. Swiss bank accounts and offshore havens in places like the Cayman Islands allowed depositors both legal and not so legal a way to safeguard assets from risks of taxation or seizure by the home government. But as new and proposed laws threaten to eradicate that privacy, real estate investing remains the only really private way to safeguard assets abroad.

Offshore banking has always offered big benefits to foreign accountholders: privacy, security and access to other currencies and marketplaces. Until recently, account information was highly private.

But now, that privacy may be fast becoming a thing of the past. The Foreign Account tax Compliance Act, or FATCA, is a US law enacted in 2010 to require US citizens anywhere in the world to report any financial accounts held outside the US to the IRS. That’s reason enough for foreign account holder to worry – but FATCA goes much further.

In addition to requiring individuals to report all their accounts held in foreign banks, FATCA also requires foreign financial institutions to report information about accounts held by their US clients to the IRS as well.

The move makes it much harder for individuals to hide assets from taxation, and for businesses to use “shell corporations” to conceal revenue. Though the law has been widely criticized as an attack on financial privacy, between 2012 and 2014 FATCA was ratified by a long list of countries large and small, including the major players in offshore banking, Switzerland and the Cayman Islands.

FATCA has stirred controversy not just because of its potential attack on financial privacy, but also for what critics call “bullying” of other countries into compliance. What’s more, the law is seen as the next step toward a policy of stripping everyone of their right to financial privacy.

Those worries might not be so unfounded. The Organization for Economic Cooperation and Development (OECD) is an international economic coalition of 34 countries dedicated to supporting free markets and coordinating domestic and international policies affecting its member countries. In 2014, the OECD stepped into the arena with an even wider ranging version of FATCA: the Global Account Tax Compliance Act, which would ensure reciprocal sharing of tax and account information among all participating nations.

The creators of both laws claim that they’re aimed at eliminating tax fraud and returning missing tax revenues to their rightful owner: the government. And, they say, individuals and corporations doing legitimate business abroad won’t be penalized. But whether an accountholder is using offshore financial institutions for purposes legal or illegal, the larger concern of loss of privacy remains.

As a recent article from International Man points out, these laws, along with recent disclosures about domestic spying and other government efforts to hack financial data, have essentially stripped everyone of privacy in their financial dealings, if those dealings involve money, stocks or other kinds of investment assets. But there’s one kind of asset that still offers the kind of privacy ad security formerly promised by Swiss bank accounts: real estate.

Foreign real estate remains the one kind of asset that allows investors to evade FATCA and the like. As Jason Hartman always advises, it’s a hard asset that appreciates over time – and ownership doesn’t have to be reported to tax authorities.

Income generated by the property does, however. And that’s a major consideration for investors hoping to generate wealth from their holdings. But used simply as an alternative to traditional bank accounts, ownership of foreign real estate by individuals is not reportable to the IRS. It also can’t be confiscated or frozen like a bank account.

Government efforts to breach the privacy of individual and business financial doings aren’t new, and they aren’t always legal either. But the increasing acceptance of the US-based FATCA and the OECD’s GATCA are making those efforts entirely legal on a global scale. For securing assets and holding onto privacy, foreign real estate may become the new offshore bank account. (Featured image:Flickr:rutio)