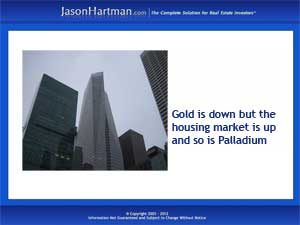 Gold prices are continuing to tumble, dropping in June 2013 to their worst first-half levels in over 30 years, thanks in part to the rebound of the US economy and the planned rollback of the Federal Reserve’s mortgage securities stimulus plan. And as gold fades from the scene, investors are putting their faith – and their funds – in the essential but largely unknown industrial metal palladium.

The connection between gold, the Fed’s bond buyup and the surge in other precious metals has a long history, dating at least to the days of the housing collapse of a few years ago, Gold has generally been viewed as a strong hedge against unstable markets, and the collapse and recession created a corresponding interest in gold and more stable Treasury bonds.

But now, the economy appears to be on track toward a recovery. Recent job statistics look promising, and the Fed’s bond buyup plan has boosted the housing market’s rebound by keeping mortgage interest rates low. Now, hints that the Fed may be scaling that program back due to the improvement in jogs and housing appear to be fueling the drop in gold.

But as gold falls, the silver metals rise. Silver prices are rising too, but palladium – the most important metal you never heard of – has them all beat. According to a recent Financial Post article, in the same time frame that saw gold take its record tumble, palladium prices have risen by nearly 10 percent.

Why the interest in palladium? Soft and intensely white, it’s a cousin of platinum, in wide demand for a variety of industrial and technological uses, from catalytic converters to medical imaging machinery and groundwater purification systems. It’s also relatively rare, with only a few large deposits found worldwide. Some palladium is reclaimed from recycling catalytic converters and other machinery containing it.

The future of palladium prices isn’t clear, though demand for the metal due to its industrial applications continues to increase. And unlike gold, palladium doesn’t directly back bonds and currencies. But the performance of palladium is measured relative to the performance of gold, which is linked to economic indicators defined partly by the health (or lack thereof) of the housing market. And those connections between the rebound of housing and the value of a soft silver metal make palladium worth watching for investors building wealth in income property as Jason Hartman advises.  (Top image: Flickr/jrubio)