Overpriced housing markets—headed for a bubble? 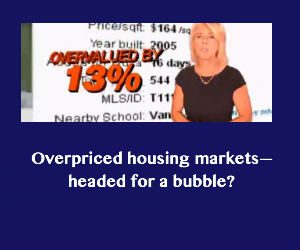 Stop me if you’ve heard this one before.

Some housing markets are getting overheated.

Trulia has analyzed asking prices for houses in major U.S. markets and then looked at the underlying fundamentals in those local economies, things like incomes and rents. The good news is the overall U.S. market is getting closer to equilibrium. Home prices nationally are undervalued by only 3 percent.

In some markets, however, Trulia believes home prices are way too high. Eight of the top 10 overvalued markets are in California. Sound familiar? Trulia does not believe there’s another bubble building yet, because lending standards are much stricter in 2014 than in 2006. Prices are also rising quickly because there are few homes on the market in some places.

Here are the top five overvalued markets in the country, based on Trulia’s research.

Austin, Texas is the hottest city in America right now. The Daily Beast called it the nation’s “Most Aspirational City.” Forbes called it the best city for job growth and the BBC called it one of the best cities in the world for dating. Geez, no wonder home prices are rising. Trulia reports the average asking price for a home in Austin is $575,000, 13 percent higher than it should be. Austin is the only city on Trulia’s list where the current overvaluation is higher now than during the peak of the housing bubble in 2006. Back then, Trulia claims prices were only 8 percent overvalued (and back then, Austin wasn’t nearly as hip).

Uh-oh. The Inland Empire suffered mightily in the housing bust, and RealtyTrac ranks the area 19th in the country in May foreclosure activity, though that’s an improvement.

More regular sales are happening in the area, and DQNews reports the median selling price in San Bernardino County is up 20 percent in a year to $235,000. Trulia believes listing prices (different than actual sales prices) are 13 percent overvalued. Could be worse. At the height of the housing bubble, listing prices here were a whopping 92 percent higher than they should be.

Trulia says that overall, listing prices in Los Angeles are 15 percent above where they should be.

Aloha! Trulia reports the average listing in Hawaii’s capital is $1.1 million, up over 5 percent in a year. Like LA, Trulia says these prices are 15 percent higher than they should be. But when you live in paradise, can prices ever really be overvalued? Yes, when the median household incomes is only $72,000.

Home prices in The OC haven’t been this hot since Heidi Montag hit the airwaves in 2006 with “The Hills.” The market back then crashed, but, like Montag, it has reconstructed itself with a vengeance. The median sales price is now $600,000 according to DQNews, up 10 percent in a year. Trulia says average asking prices—ranging from $259,000 to $5.3 million, depending on location—are 17 percent overvalued. Bubble territory? Not yet. Trulia said back during the height of the last bubble, OC prices were 71 percent overvalued.

Four of the 10 most undervalued markets are in Ohio, including the top two. Akron and Cleveland both have asking prices which Trulia believes are 21 percent BELOW where they should be.

Don’t worry, that’ll change. Lebron is coming home, and Johnny Manziel is moving in. They’ve both got money to burn.