No Jobs, No Recovery 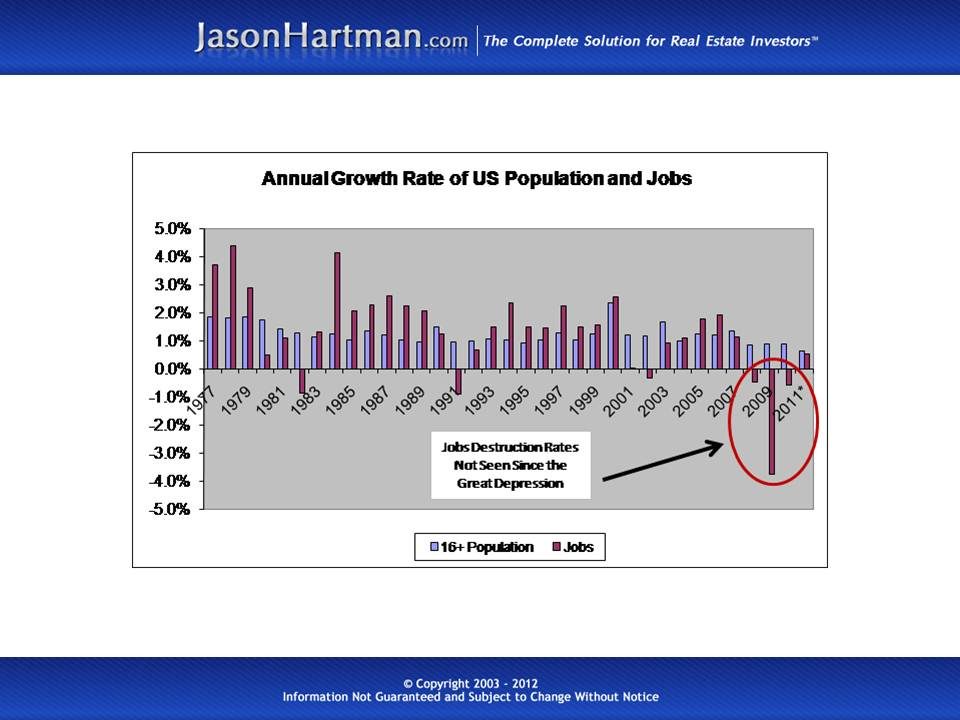 The recurrent news stories about the current economic “recovery” have begun to wear on many people. What the population at large is beginning to wonder about is jobs. Specifically, why the employment situation is still so difficult in a “growing” and “recovering” economy. Each month, jobs reports are released by the government that articulate estimates about how many net jobs were gained or lost. Naturally, the political authorities overseeing the current anemic economy quickly jump on any increases in employment as evidence of success for their policies. However, it turns out that simply analyzing raw numbers does not paint a full picture of the economic situation.

What the government press releases fail to articulate is the growth in jobs relative to the growth of the population. This is the real barometer of whether the economy is moving toward or away from prosperity. For the purpose of our analysis, the population of people aged 16 and above is the most relevant comparison for the total job growth, since these are the people who are eligible to work. When analyzing this trend over time, it becomes quickly apparent that the current recession represents a level of job destruction not seen since the Great Depression. Past recessions have resulted in net annual job growth that failed to keep pace with population growth and occasionally dipped negative for a single year. However, the past few years have seen massive net job destruction that has yet to show signs of reversal.

When analyzing the net difference between job growth and population growth, it shows a long-term trend of relative expansions and contractions where jobs have grown either faster or slower than the population of people aged 16 and above. What this chart shows very clearly is the extent to which people currently entering the job market are trapped behind a rock where massive job destruction has displaced millions of workers who are both skilled and experienced. Since most people entering the work force possess minimal skills or experience, and depend on their first jobs to build both of these attributes, there is a tremendous risk being run of creating an entire generation of terminally unemployed citizens.

Further evidence of the problems we are presented with are demonstrated by comparing the total number of employed people against the total population of people aged 16 and above. This removes the ambiguity of government unemployment calculations and simply compares total jobs against total people. What this analysis shows I that labor force participation has dipped down to a level not seen since the Nixon-Carter Stagflation Recession of the 1970’s and early 1980’s. It is certainly true that some people stay out of the labor force because they are retired, or they choose to raise a family. However, with labor force participation this low, it is impossible to ignore how few people are now supporting the entire government complex. Consider that taxes cannot be collected from people who are not employed … as the employment base shrinks relative to the total population, the burden placed on those who produce will increase as more people become dependent on the Government-Entitlement Complex™.

In response to this information, some would argue that the figures do not accurately reflect the “good news” that has come about in the second half of 2010 and 2011. To address this concern, we have constructed a monthly breakdown of the job growth relative to population growth of people 16 and older over the last 12 months. What the facts show is that over the last year, the population of employable people has grown nearly 0.5% faster than the number of jobs.

The bottom-line is that there has been no real recovery to date. The horrific levels of job losses in 2009 and 2010 have not even begun to be addressed, since the job gains over the last 12 months have not even kept pace with the rate at which new people are entering the labor pool. For all of the ruminating that pundits do over the future of the housing or stock market, the job climate is a critical variable that is not being fully appreciated.

The housing market will not recover until more people can pay their mortgage. This will not happen unless more people become gainfully employed. The stock market cannot continue its current rally unless more people invest. As unemployment continues to linger, more people will be selling their investments, which will suppress value growth in the financial markets. The simple facts are that this recession will be with us until policies and incentives are tilted toward real growth. There is no reason to believe that this will happen until or unless government policy moves in a different direction than it has over the past few years.

Action item: Use the investment opportunities created by this extended downturn to place yourself in an advantageous position when the economy resumes a growth trajectory. The recent trend of destructive public policy has created a hot-bed of opportunities for investors. Capitalize on these opportunities before they disappear.