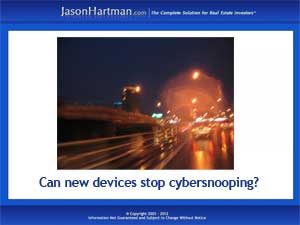 Are your private conversations really private? Is your personal data really safe? As stories continue to hit the news about the massive hijacking of Target shoppers’ information and the National Security Agency’s domestic spying operations, more and more people are feeling nervous about the security of their communications and sensitive information. Those worries are jump-starting a new industry: creating snoop proof devices that anyone can use.

Worry about data interception and online identity and data theft is nothing new. Online security experts have been warning users for years about the need to safeguard data by using passwords and other protections that are difficult to hack and keeping sensitive transactions off publicly accessed devices to avoid major data hacks like the one that hit Target department stores over the Thanksgiving holiday this past year.

But anxiety about protecting personal data hit a new high with the ongoing revelations from whistle blower Edward Snowden and other sources about the scope of domestic snooping by the country’s very own intelligence services, led by the NSA. And that, rather than the warnings about the dangers of identity hacking in general, is fueling the appetite for snoop-proof devices.

The most-hyped of these is the Blackphone, which hits the market in February 2014. It’s an Android phone that’s been tweaked to provide encryption protection for all communications, text and voice, from anywhere in the world. That’s a direct response to the news that NSA has been intercepting domestic phone calls and texts from all kinds of standard phones.

The Blackphone is the brainchild of Silent Circle, a technology company that’s suddenly making headlines for their innovations in this arena. Silent Circle employs the services of military experts and encryption specialists to develop the technology that changes a standard Android phone into something from a James Bond film. But it’s not cheap. The Blackphone is expected to retail for around $300 in the US.

Other companies have jumped on the encryption bandwagon too, responding to the anxieties raised after Edward Snowden’s revelations about the activities of that most secret of the government’s spy services. A variety of new apps have been developed for use with existing devices, such as the Confide, a messaging app for business communications that works to prevent anyone from taking a screenshot of a message, which then disappears.

For now, these new apps and devices are helping users stay ahead of the curve. But Silent Circle representatives and online security experts point out that it’s a cat and mouse game – and hackers and surveillance experts everywhere will be busy building the next generation of spyware to beat any device that’s created.

And that may be good news for technology innovators, whose companies are enjoying a higher profile – and higher revenues – thanks to the demand for the new spy-proof devices. And it’s a demand that isn’t likely to slow down soon. As Jason Hartman says, it’s wise to stay informed and in control – and the new American cottage industry is one to watch for the future.  (Top image;Flickr/cooperweb)

US Tops the Market for Foreign Investors