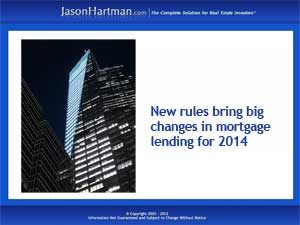 A new year is almost here, and with it come new opportunities for starting an investing career as Jason Hartman recommends. But if you’re looking forward to buying that first investment property in 2014, it’s important to remember that thanks to the mortgage meltdown of a few years ago new laws and a few tweaks to old ones have changed the US mortgage industry forever.

The housing bubble of the early 2000s burst with a vengeance in late 2007 and into 2008, leaving millions of homeowners in foreclosure –with more foreclosures fraudulently processed by major banks throughout the country. Because a significant number of those foreclosures were the result of so-called “subprime” loans issued to borrowers with risky credit profiles to start with, the post-collapse cleanup focused on finding ways to prevent such a situation from happening again.

The mortgage industry, serviced by a variety of banks, credit unions, federal agencies and other financial institutions, came under fire as a prime driver of the collapse, thanks to the reckless issuing of home loans and the unethical handling of the aftermath of the crash. So the government stepped in, with a variety of measures designed to protect vulnerable borrowers, help bail out those already in trouble, and hold lenders more accountable for the loan products they offer.

Those efforts included placing government funded superlenders Fannie Mae and Freddie Mac into conservatorship, pressing lawsuits against the big banks involved in unethical and fraudulent handling of foreclosures and loans, and passing legislation such as the Dodd Frank Act, which created new agencies for consumer protection and instituted new rules for mortgage lending.

Those new rules are designed to protect consumers from biting off more than they can chew, and to keep lenders from originating risky loans that will collapse in the long run. So for 2014, mortgage lending standards are generally tighter, thanks to Dodd Frank’s new Qualified Mortgage Rule, which requires a 43% debt to income ratio for qualifying, as well as larger down payments for mortgages.

Lenders who service loans according to these standards receive some protection from penalties and prosecution if the loan goes bad – but not if they make risky loans outside the QM guidelines.

Another factor affecting mortgages in the coming year is the Federal Reserve’s decision to begin tapering down its Quantitative Easing stimulus program – a decision that lops off $10 billion a month from its purchase of mortgage backed securities and bonds. The stimulus was designed to boost the economy by keeping interest rates low, so the Fed’s projected draw down of the plan will likely lead to somewhat higher interest rates – how much higher isn’t known.

The continued problems with stalled foreclosures – homes still in the pipeline or simply unsellable because their owners abandoned them – is likely to affect the supply of availalb3e houses for purchase in some markets, too. These “zombie” and “vampire” properties may continue to enter the market in fits and starts, affecting opportunities to buy properties for investment.

Overall, 2014 is still a good year to invest in income property – but it’s important to keep in mind the ways that the problems of the past could create a few obstacles for borrowers in the coming year.  (Top image: Flickr/voscd’anjou)

Get investing secrets from the pros at Jason Hartman’s Meet the Masters of Investing Event in Irvine, CA January 18-19, 2014.  Learn more here.