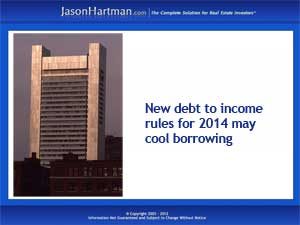 The New Year is just around the corner, and so are new provisions of the sweeping Dodd Frank Act. And while those new rules are designed to protect borrowers – and in some ways, lenders too – the changes coming in 2014 may make it tougher for those hoping to qualify for a mortgage or refinance a property they already own.

The Dodd Frank Wall Street Reform and Consumer Protection Act, as it’s formally known, was passed in July 2010 in response to the financial crisis of 2007- 2010. That crisis peaked in 2008 with the much-publicized housing collapse, as millions of homeowners were forced into foreclosure, in part because of predatory and unethical lending practices.

Dodd Frank’s stated aim was to establish better oversight of the country’s financial industries and create new provisions for protecting consumers. It’s a massive piece of legislation that spawned a number of new regulatory bodies, including the Financial Stability Oversight Council and the Consumer Financial Protection Bureau. The Act affects nearly every aspect of the US financial services industry, with implications for all areas of the economy

Some provisions of Dodd Frank are already in place, with more to come in 2014. For investors building wealth in income property as Jason Hartman advises, one of the most significant of these involves the Qualified Mortgage Rule’s debt to income ratio, or DTI. Though it pertains largely to mortgages, these tighter restrictions on qualifying for a loan also affect borrowers seeking funding for other kinds of purchases.

The DTI is a benchmark of determining a borrower’s ability to repay a loan. It’s calculated by dividing a borrower’s monthly debt repayments (including the potential new debt to be incurred) by monthly gross income.

For first time homebuyers and those looking to refinance, though, the new rule, which goes into effect on January 10, lowers the allowable DTI from the 45 percent currently in place for traditional loans down to 43 percent.

That may not sound like much. But financial experts say that those two percentage points can be the factor that stops many borrowers from qualifying. It’s expected to hit first time homebuyers the hardest and that could have the long term effect of chilling the housing recovery that fuels other sectors of the economy.

The new standards go into effect just as the Federal Reserve has announced its plan to taper down Quantitative Easing, the economic stimulus program designed to jump-start the economy by pushing interest rates down. Those rates, already beginning to rise from the historic lows of the last year or so, are expected to increase as the stimulus tapers down – adding another roadblock for first time homebuyers.

Although the new DTI rule changes the playing ground for loan applicants, industry experts point out that consumers have some power to affect the outcome. They advise anyone expecting to apply for a mortgage as well as other kinds of loans to take steps to lower their debt as much as possible before the rule change goes into effect in January. That could tip the balance in favor of income and improve the chances of approval – and get the New Year off to a prosperous start.  (Top image: Flickr.eglobaltravel)

Learn investing secrets from the masters at Jason Hartman’s Meet the Masters of Investing Event in Irvine, CA January 18-19,2014.  Find out more here.