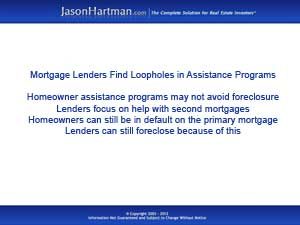 After settling with the government over the massive foreclosure abuses of a few years ago, the nation’s largest lenders are taking credit for homeowner assistance programs that, they say, have boosted the housing recovery by helping thousands of struggling homeowners to avoid foreclosure. But according to a new article in The New York Times online, even though almost half a million homeowners have gotten help through these programs, many are still in danger of foreclosure, thanks to a loophole involving multiple mortgages.

Mortgage troubles laid the foundation for the much-publicized housing collapse of 2008 and after. During the housing bubble that preceded the crash, lenders offered mortgages with wild abandon, setting up millions of subprime, or risky mortgages that ended in default and foreclosure. And after the bubble burst, processing of these massive numbers of foreclosures cast a spotlight on blatantly abusive practices among the nation’s top lenders, including Wells Fargo, Citibank and Bank of America.

After a multimillion dollar settlement was reached with state and federal government bodies and some new legislation was imposed to help protect borrowers, these lenders began to offer a variety of options to help homeowners who were still struggling with mortgage payments – not yet at the point of foreclosure, but close, missing or delaying payments. But by structuring the assistance programs to focus primarily on refinancing, these lenders are still able to keep pressing foreclosure cases – in some situations, on the very homeowners they’re helping.

The reason? Most of these troubled homeowners have more than one mortgage – the primary mortgage and a second one that’s typically a line of credit based on home equity. And it’s that second mortgage, not the first one that relief programs are addressing.

The New York Times piece reports that only 13 percent of the borrowers who got help from a bank-sponsored assistance program were helped with their primary mortgage. And even though help with the second mortgage does provide some relief to these homeowners, banks can still press foreclosure cases when homeowners are still underwater with the first mortgage.

The original settlement, reached after 50 state attorneys general investigated an array of mortgage management abuses that collectively became known as the robosigning scandal, hinged on debt reduction and how to accomplish that. The banks implicated in the scandal resisted reducing mortgage debt from the outset, so the attorneys general added monetary incentives for offering short sales – and for forgiving second mortgages in cases where the borrower runs more than 180 days behind on payments.

Under these terms, banks benefit more from helping borrowers with second mortgage than from the first. While offering aid under the terms of the settlement, they’re still pressing foreclosures on the basis of a borrower’s performance with the often-ignored first mortgage. Bank of America, for example, offered more than three times the amount of aid for second mortgages than for primary ones. One reason, say financial experts, is that borrowers are more frequently offered help with the second mortgage and are eager to accept any kind of help to pare down their debt.

For investors following Jason Hartman’s guidelines for purchasing income property, keeping an eye on the promises – and the behavior – of the major mortgage lenders can offer important clues about what’s behind the scenes of the nation’s long-awaited housing recovery.