Mortgage Rates: Nowhere to Go But Up? 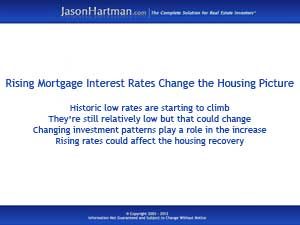 Despite predictions of continued low mortgage interest rates into the next couple of years, the rock-bottom rates of recent times may be coming to an end. That’s according to the newest BankRate reports for January 31, 2013, which notes that the going rate for a 30-year fixed rate mortgage jumped from 3.66% to 3.77% — a rise of 11 points. This could signal the beginning of an upturn in mortgage rates that affects all aspects of the housing market.

According to BankRate’s end of January report, rates rose across the board for all kinds of mortgages, not just the 30-year fixed rate. Rates for fifteen year fixed rate mortgages went up too, as did those for adjustable rate mortgages, or ARMs. Although these rates are still low, mortgagee-lending professionals worry that now that rates have started to move, there’s nowhere to go but up – and as rates soar, potential homebuyers might back off.

Why the change? For a number of reasons, mortgage rates plummeted in the years following the housing collapse of 2008. These rates are linked to the performance of assets including US Treasury bonds and other securities. In addition, the government began to buy up billions of dollars’ worth of mortgage-backed securities in an effort to keep rates low and stimulate the recovery of the housing market. With the Fed’s continued intervention rates were expected to remain low at least until 2015 or so.

Since mortgage rates are so tightly bound to external factors, even small changes in that larger picture can trigger movement. Shifts in the global economic outlook can alter the behavior of investors half a world away, and domestic issues such as high unemployment or hints of a recession can make investors more inclined to keep money in less-risky investments such as Treasury bonds.

But when the economic picture improves, investors feel more inclined to take risks, and to move funds from relatively safe assets such as Treasury bonds and government backed mortgage securities into more volatile stocks, both at home and abroad. With less invested in mortgage related assets, the rates go up. That’s what housing industry observers are noting now.

Although a large jump in interest rates may not be likely in the short term, neither is another major drop in rates of the kind seen over the past few years. Combined with more stringent lending standards, rising rates could have a chilling effect on home buying, with implications for new housing construction as well as the inventory of existing homes for sale.

Still, industry experts say, the recent rise in interest rates still leaves rates quite low. And with an uncertain future linked not just to domestic, but also global factors, the current climate remains favorable. It’s still a good time to follow Jason Hartman’s guidelines and invest in income property – before the landscape changes.