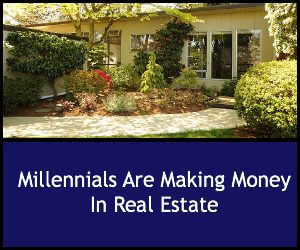 The “Millennials” have been in the headlines a lot lately – and not for good reasons. Alternately criticized for their values and work ethic and pitied for their crushing load of student loan debt, this generation of new and recent college grads seems to be facing a bleak financial future. But a young real estate investor is proving that smart money management can pay off handsomely – even for those cash strapped millennials.

A recent article from NextShark profiles 27-year-old Brian Maida, who bought his first house two years after graduating from college. Now, with two properties under his belt, he’s anticipating a comfortable retirement from his investments. His journey from income challenged new graduate to investor/entrepreneur demonstrates that you’re never too young to start investing.

Millennials – those born between about 1985 and 2005 – now make up the largest demographic group in the United States, eclipsing even their famous predecessors the Baby Boomers. By most accounts, they’re a generation in trouble, too.

New college graduates now leave school with an average of $10,000 in student loan debt. They struggle in a tight job market to find work in their fields, and many end up wither spending their entire working life paying off those debts or defaulting completely.

In the workplace, too, millennials struggle with a culture that’s often at odds with their values and lifestyles. Employers used to dealing with a more traditional kind of worker who understands and respects the formalities of the 9 to 5 world claim that their millennial-age employees don’t seem to get it. They see no reason for restrictive work hours and dress codes, and they prefer communicating electronically than in person.

It’s perhaps no wonder that the mainstream work and social culture despairs of the millennials. And many of them despair too, stuck living with family and friends to make ends meet and delaying traditional milestones like marriage, children and home purchases.

But that doesn’t have to be the case. Students are finding alternatives to taking out massive student loan debt to finance their education, such as using alternative avenues to get college coursework out of the way before enrolling, and taking advantage of free programs and scholarships instead of loans.

They’re turning to entrepreneurship rather than traditional employment, too, seeking funding from crowdsourcing, creating online companies that require little by way of physical resources, and attracting investors eager to back an innovative idea.

They’re also investing – and that’s what makes Brian Maida’s story an example of turning some of the stereotypical downsides of millennial life into a lucrative upside – and a model for others to follow.

As NextShark reports, the New Jersey native opted to live at home after graduating from college, like many of his peers. While that’s seen as an indication that the person in question simply can’t make it on their own, Maida put his time to good use, saving up enough to buy his first house. Then he leveraged that investment to buy his second property a few years later – and now, a few years shy of 30, he’s looking toward buying a third.

The takeaway for cash strapped millennials (and anyone hoping to build long term wealth from investing)? Trim expenses wherever possible, maintain a sensible budget and keep your credit clean. Careful saving can result in a down payment in a relatively short time – and once that first property is yours, its earning power can be leveraged for a mortgage to buy the next.

For new graduates who are struggling with college loan debt, the picture may be a little trickier, but not impossible. Loan defaults and late payments create a blight on credit scores, so it’s important to work with lenders and investigate restructuring and loan forgiveness options.

Millennials may be getting more than their share of bad press. But young investor Brian Maida shows that careful money management and a willingness to learn the ins and outs of the investing process can open doors for the start of a long-term career in rental real estate. And his strategies echo Jason Hartman’s essential advice to investors of any age: to get educated, stay in control of the process – and leverage the power of a mortgage’s “good debt” whenever possible. (Featured image:Flickr/Wonderlane)