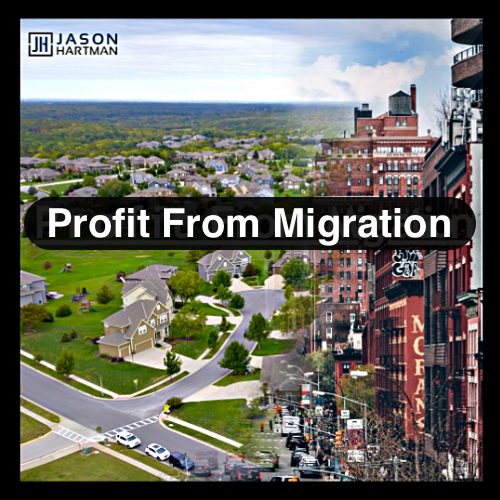 A migration from cities to the suburbs was already brewing in the months and years before COVID-19. Following the COVID-19 health crisis, the trend of people moving away from crowded cities into the more spacious suburbs is expected to continue.

After the quarantine and once states start to open back up, we expect to see the acceleration of this migration trend. For those that have been listening to the Creating Wealth Podcast, COVID-19 may be the biggest affirmation of our investment strategy in income properties in linear markets. Our network is excited to catch more of the wave of migration into the markets we’ve been recommending.

“The two big danger zones in a contagion are elevators and mass transit. When you live in a high-density area, everywhere you go is crowded. Everywhere you go has a social distancing problem. New York City has 27,000 people per square mile versus the United States, in general, has 287 people per square mile.” says Jason Hartman in a recent interview.

Why Do People Live in the City?

Migration to large cities in the 21st-century was mainly driven by job opportunities. As more people flocked to cities such as San Francisco and Seattle for jobs that provided tempting six-figures salaries, the price of real estate shot up in these areas. Beyond work, the social aspects of living in the city were appealing to many people in the form of bars, restaurants, shopping, concerts, sports events, and other venues. However, the social reasons for being in the city have abruptly come to a standstill since the beginning of the global health crisis in the US.

During the shutdowns, many lives were forced to shift from in-person to online: relationships on dating apps, work meetings on Zoom, cooking lessons on Instagram, homeschool for the kids, and binge-watching Netflix on the couch (admittedly we were doing this before the crisis). The home, more than ever, became the center of the universe. Instead of looking for job opportunities in the chaos of the city, we can now open up our laptops from the comfort of our homes and tell ourselves we are now in the office. Now a reverse migration is set to occur into the suburbs.

As the panic wore down, people began to question some of their lifestyle choices including where they live. For some time many people tolerated the “city life”: high rents, traffic, stressful work environments, noise, pollution, mass transit commutes, and a fast pace. Fast forward to March 2020 and all of that has come to a halt with the spreading of COVID-19. The city is not where many people want to live anymore.

The real estate market in many ways has been put on pause during the early months of COVID-19. However, people were still doing home searches as the real estate industry shifted online. Redfin CEO, Glen Kelmen, noted an increase in rural home demand as people look to get away from the city. Kelmen called it ”a profound, psychological change among consumers who are looking for houses.”

Whether the online activity will translate to inbound migration to rural areas is yet to be seen. However, it suggests an increased desire for life away from densely populated urban areas like New York. While most people wouldn’t trade their city lives for isolation in the mountains or on an island, many would consider living in the suburbs.

Why the Suburban Real Estate Market?

In recent times, previous to the global health crisis, Americans were already seeking an alternative to city life. The suburbs are a good alternative to the city for many people. Lower cost of living, lots of outdoor space, access to the city, minimal traffic, quiet nights, cleaner air, and an overall healthier environment are some of the things suburban life offers.

Now instead of simply seeking refuge from the risks of COVID-19, people are looking for a lifestyle change that begins with where they live. In the 1960s, the surge in popularity of the suburbs was associated with the American Dream. For millions of Americans, the suburban real estate market offers larger and more affordable houses, increased privacy, increased safety, while maintaining access to jobs.

A report from The Brookings Institution provides data showing the growth in US cities was stagnating before the coronavirus health crisis.

Remote Work and the Decline of Commercial Real Estate

Commercial real estate is one area of real estate that we believe won’t be coming back anytime soon. The inevitable move out of expensive cities for many employees means less demand for commercial office space. Leading tech companies have already shifted to remote work for all or most employees. This is a win-win scenario for both employees and employers and may lead to tremendous changes in the commercial real estate market. In an effort to keep staff on payroll, cut expenses, and keep everyone safe from harm, companies such as Facebook and Google are asking their staff to work from home until the end of the year. Others are making the timeframe indefinite. Twitter CEO, Jack Dorsey, emailed his staff letting them know they could work at home permanently.

Since many companies already recognize the current burden of working from home for parents, they have given bonuses to help offset some costs. One example is Facebook’s $1,000 stipend for childcare costs. The savings from the reduced office space could lead to permanent benefits like childcare or a stipend for home office equipment.

Remote work also saves an employee’s time by cutting out the commute. Now instead of driving to and from work in heavy traffic on one of Los Angeles’ congested highways or crammed into New York’s subways, they simply have to walk from the bedroom to the home office.

The demographic shift into the suburbs will provide many benefits, space being one of them. For those working at home, additional space for a home office needs to be considered. The suburban setting offers this.

Homes in the city offer much less space than most people desire for a much higher price. According to Forbes, a survey showed 31% wanted dedicated office space, 30% wanted to live in a larger home, and 29% wanted to live in a home with more rooms. The reasons for this varied. Working from the place you sleep might blur your work-life balance and hosting conference calls in the living room when the kids are fighting may be difficult. Extra space in the suburbs solves this. Those with children also need space for homeschooling and play.

Schools across the nation and the world have been shut down, both K-12 and higher education. While learners may lack the physical facilities of a traditional classroom, alternative education movements and platforms were already preparing for remote learning.

However, if a parent is on a conference call and their son is receiving a lecture on the water cycle on Youtube, there could be a clash of personal space needed for work and learning. The move from the densely populated cities and small spaces into the spacious American suburbs means more room for everyone in the family.

In higher education, college students will not be willing to spend $50,000 per year for online classes without the college experience. According to US News, “Tuition and fees vary from college to college. Among ranked National Universities, the average cost of tuition and fees for the 2019–2020 school year was $41,426 at private colleges, $11,260 for state residents at public colleges, and $27,120 for out-of-state students at state schools”. The savings for students could be huge.

If you’re looking at real estate right now, remember that the US is not a single real estate market. There are about 400 different markets in the US, each with their own distinct qualities. Imagine a nice single-family home for $100,000-200,000. These are the type of properties available at JasonHartman.com/properties