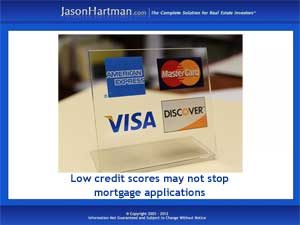 Lending standards took a tighter turn this past January, making it harder for many would be homebuyers to get a mortgage – and fueling fears of a slowdown in the recovering housing market. But in spite of those new requirements, some lenders are making their own decision to loosen mortgage standards. And that’s raising new concerns about another crash.

The much-publicized crash of 2008 came about largely because of loose lending standards that had banks offering mortgages to virtually anyone who applied, regardless of their creditworthiness. And many of those new borrowers ended up defaulting down the line, triggering investigations into the shoddy lending practices and outright fraud among the nations’ big banks.

As those big banks were called to account in a string of multimillion dollar settlements, new legislation ushered in much tighter standards for granting mortgages in the first place: the Dodd Frank Act and the Qualified Mortgage Rule, which established a higher debt to income ration and required a larger down payment from most applicants.

But the Qualified Mortgage Rule and requirements like it aren’t absolutely binding. The Rule only provides lenders some protection against legal action if a loan conforming to the Rule goes bad. Lenders can always write whatever loans they choose.

And according to a new Business Insider report, it seems that more and more of them are choosing to do just that, approving loans to applicants with the lowest credit scores than at any time since the crash, and allowing down payments as low as 5% — or even zero in some cases.

What does this all mean for the future of the housing recovery? Are looser standards opening doors to new applicants that might keep the recovery momentum going? Or is the nation headed for another crash driven by the same factors as the previous one?

It’s always said that those who ignore the lessons of history are doomed to repeat it. The lessons of the crash are relatively fresh, and they’ve created a lending environment that’s different in key ways from the conditions that created that collapse.

For investors following Jason Hartman’s advice on building wealth through income property, though, the new discretionary practices by the nation’s lenders, along with relatively low interest rates, just may open doors to new opportunities in income property – and keep the housing market on the way to recovery.  (Top image:Flickr/PhilipTaylor)

CW375: Right On The Money With Doug Casey

The Dollar: Still a Go-To Currency