Living in the Land of Volatility 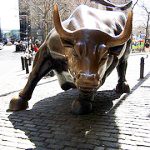 Traditional financial theory holds that the best way for average investors to acquire wealth over the long term is to become a ‘buy and hold’ investor. The basis for this notion is rooted in the fact that stock market values have progressively grown over an extended time interval. For example, the 20-year period from 1974 to 1994 saw a relatively smooth growth trajectory, even when accounting for the market crash of 1987. When investing in this kind of market, it is quite rational to ‘buy and hold’ because of the steady value progression over time. 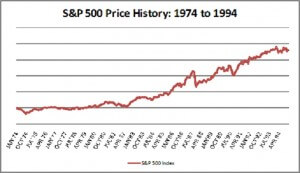 When the chart is extended from 1974 to 2004, it paints a much different picture. The internet boom that started in 1994 and crested in 1999 represents a stock market bubble that changed the tenor of the marketplace. The rapid inflation and collapse of market values revolving around the technology sector introduced a tremendous degree of volatility into the financial markets. As this event unfolded, an increasing population of investors emerged who had bought at the wrong side of the market cycle, and were not experiencing the expected smooth “buy and hold” growth curve. 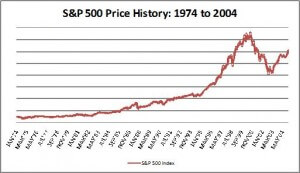 When the time interval is extended from 1974 to August, 2009 it reveals even more depth to the picture of volatility. The steady growth trajectory of the first 20 years has given way to wild, volatile swings in market values that make buy and hold investing much more precarious, depending on the time at which you buy. Furthermore, the paradigm of the market appears to be shifting away from long-term fundamental growth toward one of timing market cycles. The primary reason for this phenomenon is a dramatic increase in government intervention and financial manipulation causing ‘boom’ and ‘bust’ market cycles. This is combined with a lack of new investment capital to drive up market values.

The market boom of the last 25 years was largely driven by a capital infusion from pension funds through ERISA, price stability, low cost debt capital, and tax cuts that increased incentives for expansion. Unfortunately, current market trends point in the exact opposite direction of all these contributory factors. Many baby boomers will be facing mandatory ERISA distributions in coming years. Furthermore, the massive monetary expansion policy of the Federal Reserve in recent years will make price stability more difficult to achieve. Debt capital is expected to get more expensive as the price inflation from recent monetary expansion unfolds, and higher taxes are expected in the near future, as the government searches for ways to underwrite its massive spending obligations. 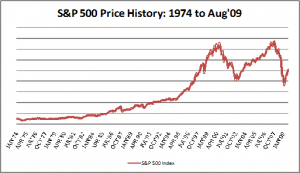 It appears that volatility is here to stay in the world of stock market investing. The stock market represented a very powerful wealth building tool for many years, but is becoming increasingly risky as the macro-market indicators are being steered away from a long-term growth trajectory. Prudent investors should seek other avenues for investment such income properties that are located in diverse markets. The fragmented nature of income properties make them extremely difficult for the government to efficiently manipulate, and also make them one of the best remaining ways for investors to build real wealth.