Are We Living in Abundant Times? 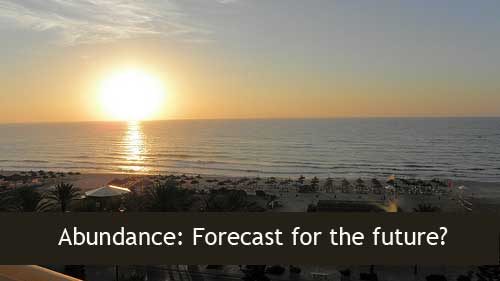 It seems that the headlines of the day are always filled with relentless drumbeat of sad news: the economy’s slow, jobs are stagnant, crisis and chaos grip the world. But a new book that takes a look at the big picture of economic and cultural trends over the last century or so offers a bold challenge to those gloom and doomsayers.

The future is better than you think say authors Peter Diamandis and Steven Kotler in their new book, Abundance, which argues that, taken overall, the human beings on this planet right now are actually living in times of unprecedented abundance, and that the future doesn’t have to be feared. They’ve got the statistics to prove it, with charts showing everything from the narrowing gender wage gap to the number of people in countries around the world who are finishing college now.

A Century of Improvement

Diamandis and Kotler point out that in spite of current predictions about the decline and fall of current cultures and governments, most areas of life have taken a major upswing in the last century or so. Their conclusions range from the obvious (there were more deaths in war in 1918 and 1940 than in our current cycles of armed conflict) to the surprising – a correlation between a reduction in armed conflict and expanding Internet use.

The data, presented on the duo’s website, come from a variety of different studies and analytical frameworks developed by various institutions such as the US Census Bureau. ISA Today and university think tanks from round the world. While some is a little esoteric – there’s been a decline in the cost of human genome sequencing and an upswing in the number of people who shower daily in the winter – taken as a whole, the stats and trends offered by Diamandis and Kotler paint a picture of a rapidly changing, but also vastly more abundant world than the ones our parents or grandparents lived in.

Since 1900, the average human lifespan has increased by a stunning 36 years or more, and the whirlwind pace of technology, means that people in just about every part of the world have the opportunity to become better informed than ever before – and able not just to receive information, but to create it and share it with the click of a mouse.

Physical comforts are more widely available than ever before, too. That observation about the percentage of people (75) who take a shower in the winter now as opposed to the 1950s (18) speaks to a variety of things including access to indoor plumbing, heat and water.

Another indication of abundance in the world is the number of photographs taken, from zero in the 1850s to thousands today. Add to that the data showing a dramatic increase in the number of people who are able to use the Internet and you have a profile of a population that’s literate and tech-savvy. People make more money and have more leisure time than at any time in the past century and more.

And, the authors argue, because technology and innovation advance exponentially, not linearly, tha means that the future could be very bright indeed.

The takeaway for investors? While no one’s advising a head in the sand approach that ignores the realities of current economic conditions and the struggles of people around the world to simply survive, and the ongoing political and social issues that need to be addressed, this look backward sheds a strong light on the future, with implications for building wealth in real estate.

People are better educated than ever, with unprecedented round the clock access to the most widely available of all commodities, information. And that’s good news for investors in a rapidly growing rental market, where new opportunities become available on a daily basis and there’s always something new to learn. Networking is only as far away as the touch of a button, si it’s easier than ever to stay educated and informed – two of the most important things an investor needs to be successful, as Jason Hartman says.

These gains aren’t likely to vanish. And if you’re hoping to get started in income property investing, the strides we’ve made over the last hundred years or so mean that new doors are opening to learn about investing, make new decisions – and turn more profits. In an abundant world everybody benefits – and three’s always enough to go around. (Top image: Flickr/KevFowler)
Source: