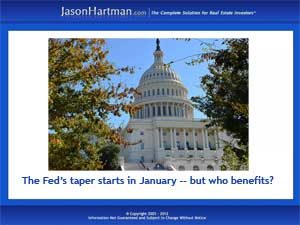 After months of waffling about the fate of its massive bond buying stimulus plan, the Federal Reserve has taken the financial world by surprise with its just-released announcement that it will begin “modestly” tapering the plan down in January 2014. While the news ended months of anticipation for money markets, investors and consumers in general, analysts still wary about the outcome.

The fate of the stimulus, officially called “Quantitative Easing,” hinges on the health of economic indicators such as employment and housing. The plan, conceived as a boost to the economy in the wake of the 2008 housing crash, involved buying up around $85 billion monthly on mortgage baked securities in order to help lenders keep interest rates low and stimulate borrowing.

Throughout the summer, the Fed hinted that it would begin reducing the amount of securities it was purchasing in response to better job numbers, which led to the widespread expectation that by fall the tapering would begin – a process dubbed “Septaper” in some circles. But as employment rebounded but continued low, Fed Chair Ben Bernanke retreated, offering no new timetable for drawing down the program.

Now, with better employment numbers, the Fed plans to really start reducing the scale of its bond buying effort by a mere $10 billion a month – bringing the total monthly purchase of mortgage backed securities and Treasury bonds down to $75 billion.

According to a new report by CNN Money, Fed officials maintain that “tapering” doesn’t mean “tightening.”  They insist that interest rates will still stay low for a while, depending on factors such as unemployment numbers and rates of inflation.

The tapering offers benefits for some and drawbacks for others. In response to the Fed’s announcement, the Dow surged and the news boosted the value of the dollar in international currency trading. On the home front, market watchers see a jump in the interest rates on certain kinds of loans, including student loans and mortgages. Foreign travel may see a ji,p, and so could retired individuals an those on fixed incomes who rely on the interest accrued in checking and savings accounts.

The Fed takes on new leadership in 2014, as Bernanke steps down and Jane Yellen is expected to step in – and that may mean new directions for Quantitative Easing. But the Fed insists that its commitment to supporting the economy continues firm, and that this slight tapering doesn’t mean the end of the program.

For many, $10 billion is an unimaginable amount. To the Fed it’s a mere drop in the bucket. But Fed officials insist that that kind of “modest” taper down will also mean only a modest rise in interest rates for loans such as 30 year fixed rate mortgages of the kind Jason Hartman recommends for building wealth through income property.  (Top image: Flickr/EGlobeTravel)