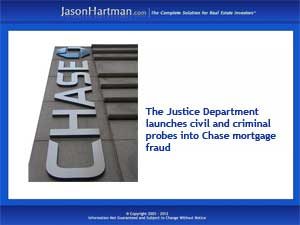 It’s been nearly five years since the housing market suffered its catastrophic collapse, and new mortgage fraud charges are still being filed against the big banks responsible for most of the disastrous subprime mortgages and the widespread foreclosure abuses that followed. Bank of America has long been the poster child for widespread fraud and misrepresentation, but now its compatriot JP Morgan Chase is taking its turn in the spotlight, with new civil – and criminal—investigations related to its handling of mortgage backed securities.

Just a few days after the US Justice Department and Securities and Exchange Commission announced two new lawsuits against Bank of America for mortgage securities fraud dating to the start of the housing crash, those same agencies are now launching civil and criminal investigations of JP Morgan Chase for similar behavior.

The probes of Bank of America, Chase and the other banks – ultimately, sixteen in all – most heavily involv3ed in fraud and illegal actions relating to the housing crash are being conducted on the request of the Financial Fraud Enforcement Task Force.  orFFETF, an agency established by President Barack Obama back in 2009 to investigate and stop consumer fraud on a number of fronts, including elder abuse and phone and Internet scams.

The task force was responsible for bringing the latest suit against Bank of America and will press charges against Chase as well if the investigations find cause to do so. At issue are more offerings of mortgage-backed securities, bundled mortgages sold as single securities packages to large investors.

Before the housing collapse, lenders created and sold unprecedented numbers of subprime loans which eventually collapsed in the hands of uninformed and unprepared borrowers, many of whom fell into foreclosure. And, according to charges filed against BofA, Chase and the rest of their cohorts after the collapse, many of those foreclosures were illegally and fraudulently processed.

Now, the new investigation of Chase focuses on a series of mortgages securities handled between 2005 and 2007,when, according to a new Reuters report. Chase violated a number of federal securities laws in selling and servicing those loans. The investigation points up the broad scale of mortgage fraud – and the likelihood that more remains to be discovered.

For its part, Chase has upped its estimate of legal-related losses for the year to nearly $7 million – and counting. In investigating the bank, the FFETF points out that fraudulent practices in the residential; mortgage industry continue – and that more investigations and charges will likely follow. That may be good news for investors and homeowners depending on mortgage products – and or the health of the housing recovery itself. (Top image: Flickr/TheConsumerist)

Join Jason and his team of investing experts for the Austin TX Executive Property Tour on Sept. 28, 2013. This one-day event features a private tour of Austin’s hot properties and personal support for getting started in income property investing.  For full details and registration, click here.

Read more from our archives: