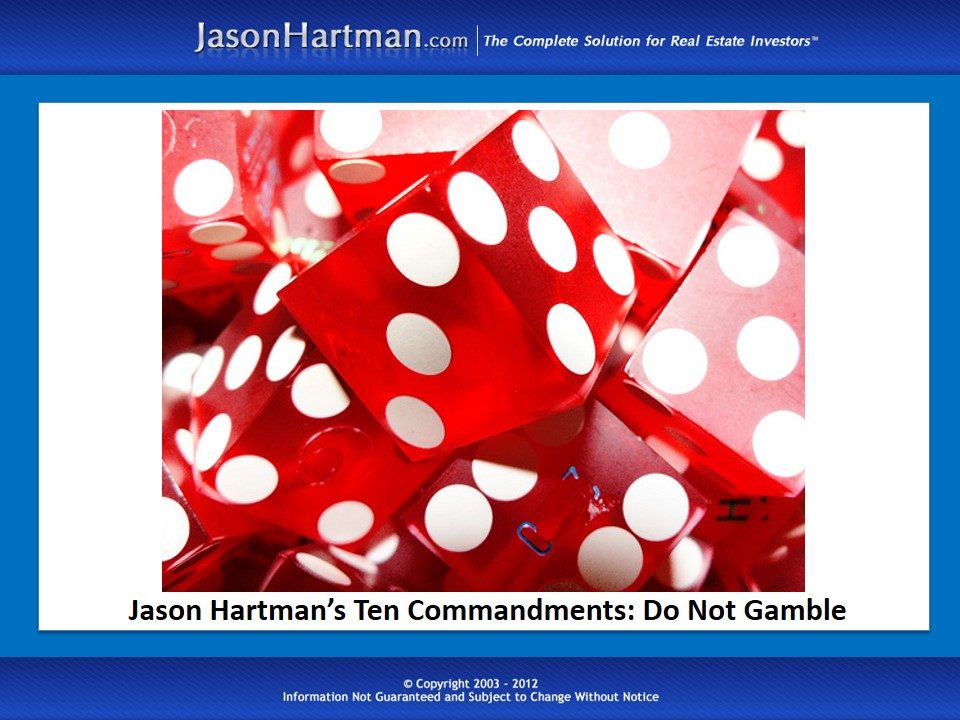 While risky investment strategies like house flipping hold the promise of quick cash, the secret to true wealth—long term wealth—is in the informed purchase of value-appreciating property. In fact, when you choose to involve yourself in such gambling, you disobey Jason Hartman’s fourth commandment of successful investing. You give up being prudent in favor of simple spending money, which is different from real wealth.

Perhaps you’ve heard of Archie Karas, Greek-American gambler famous for completing the largest and longest documented winning streak in the history of gambling. Referred to as The Run, the streak turned $50 into over $40 million in three years, a remarkable feat. But it ended as spectacularly as it began—Karas emptied his bank accounts in just three weeks.

The first $11 million was lost to playing dice, the next $17 million to baccarat. Karas was worried and stressed, so he returned to Greece, but the break wasn’t enough for him. Upon his return to Las Vegas, he returned to dice and baccarat and drove his bank account down to the last million. Still unsatisfied, Karas bet his money in a poker room and turned $1 million into $2 million, only to lose it to dice and baccarat a few days later.

Karas, if not for the thrill of the game, would have been wise to follow Jason Hartman’s buy and hold strategy. He was swept up in the thrill of the win, watching his money double before his eyes. The same is true for those who pursue risky investment strategies, though it is no wonder, given the glamorization of house flipping and other quick-cash guessing games in the media, television shows in which good looking people purchase a house, DIY a couple of things, and make massive profit.

But the story is always more complex than it seems—Karas, for example, not only lost his fortune but was also arrested in 2013 for marking cards in a Vegas casino. His wealth was only temporary because he didn’t take advantage of a fortunate situation.

As an investor, your money is better spent making purchases you intend to hold onto, so stop speculating and bet on a sure thing. Not only is it easier, it is more secure and more future-friendly. Take Kenny Rogers’ advice in The Gambler—If you’re gonna play the game, boy, ya gotta learn to play it right. Which is to say, not at all! (photo credit: -RobW- via photopin cc)