Jack Canfield Dishes Up Chicken Soup for the Soul 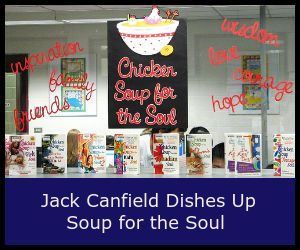 If you have never heard of Jack Canfield and his Chicken Soup for the Soul series of books, you should check your surroundings. You might be living under a rock. Before Canfield, there was no such thing as an inspirational anthology. Since the release in 1993 of his original book, there are now more than 500 million copies in print around the world.

Canfield has since gone on to write other seminal works like The Success Principles, The Power of Focus, and now an online course teaching students how to reach bestseller status with their own books. Jason welcomes Mr. Canfield to episode #310 of “The Creating Wealth Show” to discuss his early years and how he became America’s #1 Success Coach.

Before getting down to the nitty gritty with Canfield, Jason spends a few minutes talking with Steve, an investment counselor, about why it’s so hard to understand how to calculate profitability when it comes to real estate investments. The problem is real. It’s easy to measure performance with stocks, bonds, mutual funds, and precious metals because you pay the entire purchase cost up front.

Real estate is a different flavored cat. Consider that you only put down 20% up front and then pay the rest over the life of a thirty year mortgage. It’s sort of a pay-as-you-go stretched over three decades. While there’s no guarantee that the following case study will untangle your brain, it should give you a clearer vision of the profit potential in real estate investing.

For your edification, Steve put together four pro formas based on a single Memphis property. He then tweaked the assumptions to show how it would affect the cash-on-cash return and total return. The rental house in question is 2,033 square feet, rents for $1,195 monthly, and would cost a grand total of $23,340 to buy.

Middle Case Scenario: Assumptions – 3% appreciation, 8% vacancy, 9% management fee. Under these conditions, which are normal, an investor would receive a 12% cash-on-cash return and 31% total annual return.

Best Case Plus Scenario: Assumptions – 0% vacancy, 3% maintenance, 10% appreciation. Almost anyone would call the preceding assumptions rosy, but they’re not impossible. In fact, Jason has encountered such conditions when he was lucky enough to snag a long-term, quality tenant who took care of the property. These numbers yield a 21% cash-on-cash return and 67% total return.

Worst Case Scenario: Assumptions – 0% appreciation, 20% vacancy, 15% maintenance, 9% management. These numbers represent what would truly be an apocalyptic investment property. Everything has gone wrong yet…cash-on-cash return is at -4% and total return still yields 1%. But you gain another 5% when factoring in your depreciation deduction.

The point Jason and Steve make with all these numbers is that, too many times, people are winning when they think they’re losing just because they don’t know how to keep score.

For close to two decades, Jack Canfield has been known as America’s Success Coach, but his life wasn’t always peaches and cream. He came from an unremarkable childhood in West Virginia, good but not great in both athletics and academics. He managed to snag a scholarship to Harvard after high school. Four years later he held a Bachelor’s degree in Chinese history.

As it came time to exit academics and enter the workforce, Canfield felt a calling to teach. After leading an inner city classroom for one year, he became fascinated at uncovering why the kids weren’t motivated. He realized that students were more interested in stories than facts. On a whim, he started collecting success stories of those who had made it out of the ghetto and used them in the classroom as a motivational tool.

Collecting Stories for Fun and Profit

In 1993, Canfield released the initial Chicken Soup for the Soul book. This after it had been rejected 144 times by various agents and publishers. To say the idea of collecting stories into motivational anthologies was a runaway success would be understating the matter. By Canfield’s count, there are 150 extensions of the Chicken Soup brand. Pick a niche or specific interest. There’s a good chance there’s a Chicken Soup book for it.

Jason asked Mr. Canfield about his business model. Are the books written by other authors done under a joint venture model, franchise, or something else? Early on, he worked personally with prospective authors but since selling the business to a New York company, he doesn’t have as much personal input, though still serves as a consultant.

Since turning the day-to-day operations of the Chicken empire over to another company, Canfield has written 12 books on a variety of topics. The one he’s most proud of is the perennial bestseller The Success Principles.

Summing up the fundamental ideas behind the book were difficult because, rather than condense success down into an easy handful of ideas, the book covers 25 fundamental principles for success. The end result, Canfield says, is to create your own system. His definition of a system is something that always works and gives you a predictable result. He added that you should be prepared to take 100% responsibility for your life. Take control of your thoughts and behaviors.

In closing, Canfield told a story about Jon Bon Jovi, the highly successful rock recording artist. Early in his career, back in New Jersey, the then teenage Bon Jovi was having a hard time getting traction for his songs. None of the local radio stations would give him any airplay.

But when the kid started showing up at 3 am with pizza and beer for the DJs, his music began to find its way into the rotation. The rest, as they say, is history. Canfield would phrase it as “Visibility equals credibility equals profitability.”

Can Anyone Write a Bestseller?

Canfield’s latest project is an online course which claims it can teach almost anyone how to write a bestseller. Learn more about the project at BestSellerBlueprint.com. Canfield’s other work can be found at JackCanfield.com. (Image: Flickr | Enokson)

Taking the Mystery out of Repairs, Improvements, and Rehabs

Financing FAQs You Need to Know