Is A New Housing Bubble On the Way? 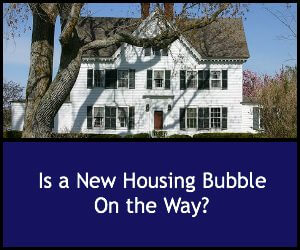 As every child knows, bubbles are wonderful – until they burst. That’s why real estate and financial experts are keeping a wary eye on the recovering US housing market, searching or signs of a new bubble that can only burst sometime down the line. And those signs may already be appearing.

The last housing “bubble” was characterized by spiraling prices, easy lending and shrinking supplies of existing homes in the face of increased demand. Reckless lending practice put millions of unqualified buyers into homes they couldn’t afford with mortgages they didn’t understand – and it all came crashing down in 2008, when that bubble burst with a vengeance.

The much-publicized housing collapse meant millions of mortgage defaults and foreclosures. Strapped homeowners ended up with no house and bad credit, lenders were prosecuted for fraudulent practices and the housing crash plunged the country into recession.

The housing recovery has been a long, slow process punctuated by legislation mandating tighter lending standards and better consumer protections for mortgage seekers, settlements by lenders and the processing of masses of foreclosure actions. But market watchers point to encouraging signs: housing prices are going up and in many areas the demand for homes to purchase exceeds the available inventory.

Ironically, those very signs of recovery may be the first indicators of a new housing bubble in the making –at least in some areas. As a new article from Keeping Current Matters points out, a major factor in the long-term recovery of the nation’s housing markets is the shortage of available homes for sale.

Pries are determined largely by the simple dynamics of supply ad demand – and in many areas around the country, buyer demand exceeds the supply of properties available for purchase. That’s especially true in higher end markets like California’s Bay Area and major East Cost cities like New York, which are highly desirable locations for higher income American buyers and foreign investors.

The supply of homes in those areas is limited partly by saturation. In congested urban areas, there simply isn’t much land available for new construction. But the supply and demand equation in markets; large and small is also affected by other factors.

After the collapse of 2008, many potentially available homes were caught in the so-called “foreclosure pipeline.” Those were houses awaiting foreclosure judgments from the courts, properties whose owners had simply walked away, and disputed foreclosures in legal actions. Held in limbo by lenders, they couldn’t be sold.
And when many of these homes became available, they were sold off in batches to large investing firms, many of them foreign, by lenders determined to get rid of them. Destined to be rentals, these homes were off the market to prospective residential buyers and investors.

Though home ownership is down across the board, reaching twenty-year lows, an improving employment picture and some creative tweaking of credit and lending standards has boosted interest in home buying too.

Lenders are exercising more caution, partly because of oversight mandated by the Dodd frank Act and the sting of lawsuits and investigations that followed post-crash scandals like the “robosigning” fiasco in which foreclosures were approved with fraudulent signatures. But to encourage buyers, they’re flexing down payment and credit standards, which creates new opportunities for first time and lower income buyers.

While rising prices and increasing demand for properties to purchase are factors that seem to signal the early stags of another housing bubble, the housing landscape is very different today than before the crash of 2008. As Jason Hartman points out, the “housing market’ is really many markets, and a new housing bubble may affect only some higher end areas where properties are in short supply.

For investors, the possibility of more localized housing bubbles points up a key component of Jason Hartman’s wealth building strategy: diversify holdings in as many markets as possible. That way, changing market conditions won’t burst the bubble of your investing plans. (Featured image:Flickr/prnwa)

It’s Easier Than Ever To Become a Millionaire