Why interest rates may stay very low for a lot longer 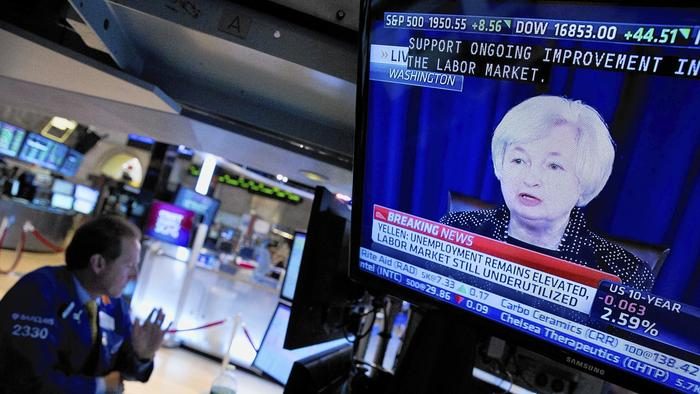 Since the financial crash of 2008, one of the biggest guessing games in the U.S. economy and markets has centered on interest rates — and when they would finally rise from the historic lows that followed the Great Recession.

But year after year, analysts who predicted a sustained rebound in rates have been foiled. The long stretch of rock-bottom rates has been great for many home buyers, corporate borrowers and stock markets. It has been murder on conservative savers, particularly older people with money in banks.

Now, with the U.S. economy showing resilience after a winter slump, the focus has again shifted to the question of when interest rates could begin to return to “normal” levels.

Yet many economists and investment pros believe that neither short-term nor long-term rates will go significantly higher, and stay there, in the next few years. More likely, they say, are modest increases that might even be quickly reversed.

The implications of another extended period of depressed rates would be huge for Americans’ investing and saving strategies. It could continue to support stocks’ bull market and home prices, for example.

But pension funds hoping for higher bond yields to fund promised retiree benefits would be stymied. And there would be more frustration for savers who now have nearly $10 trillion sitting in short-term bank accounts and money market mutual funds, earning almost nothing.

At the heart of the debate, of course, is the Federal Reserve. The nation’s central bank controls short-term rates and has held them near zero since the end of 2008 to support the financial system and economy.

In a report Fed policymakers issued after their June meeting, they made clear that they expected to finally begin lifting their benchmark rate in 2015, if the economy continues to expand and unemployment continues to decline.

Asked for their rate prediction for the end of 2016, the majority of the Fed panel expected 2.5% or less. And because the Fed’s rate influences all other interest costs, that would suggest still-low rates across the board.

To put the 2.5% forecast in context, the Fed’s key rate was more than double that, at 5.25%, in September 2007, one year before the financial system meltdown.

The Fed’s caution fits with a theme that has been heavily debated on Wall Street since 2008: the idea that the U.S. economy, badly scarred by the Great Recession, has become stuck in a slow-growth mode that could last many years.

Summers’ scenario is a more dire version of the “new normal” that investment giant Pimco in Newport Beach described beginning in 2009. The firm, led by bond guru Bill Gross, foresaw a long period of struggle for the debt-saddled global economy instead of the usual rapid post-recession rebound in growth.

Now, Pimco and Gross have coined a fresh term for what they see ahead: the “New Neutral,” a reference to the Fed interest rate level appropriate for the economy’s pace and the level of inflation. They see the Fed’s rate no higher than 2% through the end of the decade.

“The New Neutral … suggests things are just gonna be this way for at least the next three to five years, and likely much more,” Gross says.

Another huge money manager, Prudential Investment Management, also is warning clients against counting on a return to interest rates that were considered normal seven years ago — let alone to the double-digit rates of the inflation-wracked 1970s.

The long stretch of rock-bottom rates has been great for the stock market. Above, a trader works on the floor of the New York Stock Exchange as Janet Yellen, chair of the U.S. Federal Reserve, speaks during a news conference. (Jin Lee, Bloomberg)

Rather than a historical oddity, the current low-rate environment is closer to the long-term norm, Tipp said. The 10-year U.S. Treasury note yield, a benchmark for other long-term interest rates including mortgage rates, has mostly bounced between 1.5% and 4% since 2008.

That also was the usual range for the T-note yield from the late 1880s through the early 1960s, a period that included economic booms and busts, according to data compiled by Yale University Professor Robert Shiller.

Even if Fed policymakers begin raising their key rate next year, they will be wary of any new wobble in the economy, Tipp said. “If they see any sign of a slowdown, they’ll stop,” he said.

That could mean wider intervals between rate hikes, because this economic recovery has had a stop-and-go pattern since it began in mid-2009.

Scott Minerd, chief investment officer at money manager Guggenheim Partners in Santa Monica, also believes the Fed will be “hypersensitive” to economic conditions as it tightens credit. After the economy’s crash in 2008-09, “they are frightened that it could ever happen again,” he said.

What’s more, the Fed’s counterparts, the European Central Bank and the Bank of Japan, have shown no signs of retreating from their own campaigns to keep interest rates depressed. Their benchmark short-term rates are even closer to zero than the Fed’s rate. And the ECB last week said it was ready to launch new programs to pump money into the struggling Eurozone economy, where the jobless rate is 11.6%, nearly double the U.S. rate of 6.1%.

But central banks directly control only short-term rates. Long-term rates, such as on bonds, are influenced by the banks but are set by investor demand — from giant pension funds to small savers hunting for steady income.

This year, once again, investors have been following the central banks’ lead by driving bond yields lower. Yields fall when investors are aggressive buyers of bonds because strong demand allows bond issuers to lower the interest rates they offer.

The 10-year T-note has fallen from 3% at the start of 2014 to 2.64% now. That slide took many Wall Street pros by surprise because it came even as the Fed has cut back on its own bond purchases.

In December 2012, the Fed began buying $85 billion a month in Treasury and mortgage bonds, its third round of bond purchases since 2008. The goal of the programs, known as quantitative easing, was to help push long-term interest rates lower to boost the economy. But beginning late last year, the Fed began reducing its purchases by $10 billion a month.

Investors, however, have more than taken up the slack left by the Fed.

Robust investor demand for bonds in part stems from the developed world’s aging populations, who are increasingly hungry for interest income and relative safety of principal, analysts say. The long-term drag on the global economy and on interest rates from graying demographics is a favored theme of Jeffrey Gundlach, who oversees $50 billion at DoubleLine Capital in Los Angeles and who foresees a long period of subdued interest rates.

In the aftermath of the financial crisis, shell-shocked investors pumped an unprecedented net $1 trillion into U.S. bond mutual funds from 2009 through 2012, while they were net sellers of stock funds, according to the Investment Company Institute.

In 2013, bond funds saw a net outflow of $80 billion as some investors cashed out. But in the first five months of this year, the inflows resumed, totaling a net $40 billion.

Despite the potential economic and demographic downward pressure on interest rates in the next few years, those forces could easily be overridden by another: inflation. If prices for goods and services were to rise sharply and stay elevated, bond investors could quickly drive longer-term interest rates up dramatically. They would have to, or they’d risk locking in interest returns that would be badly eroded by inflation.

Since 2009, investors have had little to fear from inflation, which has remained mostly below a 2% annual rate by any of several key gauges.

Measured by the Fed’s favored inflation gauge, the so-called personal consumption expenditures core deflator, annualized inflation fell to a rate of just 1.1% in January and February. That set off alarm bells that the economy could face the opposite threat: deflation, meaning a broad decline in prices fueled by dismally weak growth.

In the last few months, however, the Fed’s inflation gauge has rebounded, reaching an annual rate of 1.5% in May. The better-known consumer price index also has accelerated, reaching 2.1% in May, a 19-month high.

Asked at a June news conference whether markets should be concerned about the sudden pickup in inflation, Fed Chairwoman Janet L. Yellen said the increase was partly “noise,” though she didn’t elaborate. She also pointed out that, at 2%, inflation was just reaching the Fed’s long-run target rate.

Still, some analysts say the surprise could be that inflation continues to rise this year, in part because of pressure from higher energy costs. “We think you’ll see stronger inflation readings in the near term,” said Rick Rieder, co-head of Americas fixed income at money manager BlackRock Inc. in New York.

The result, he said, may be that the Fed moves to raise short-term rates “sooner than many market watchers expect.”

But in the longer term, many big investors see inflation remaining low for one overarching reason: “To see a pickup in inflation you have to see it in wages. It just isn’t there,” said Ethan Harris, co-head of global economics research at Bank of America Merrill Lynch in New York.

Growth in average hourly earnings of U.S. workers has crashed from an annual rate of 3% to 3.5% before the Great Recession to around 2% since 2009, Bureau of Labor Statistics data show. That’s a function of continuing high U.S. unemployment and the glut of labor overseas. Many workers have no ability to press for significant wage increases.

Even though the U.S. economy added a net 288,000 jobs in June — exceeding expectations — annualized wage growth held at 2%. Historically, it has taken rising wages to fuel a sustained increase in prices — because otherwise, hefty price hikes can’t stick. “To get a wage-price spiral, you’d need to have a different global economic landscape,” said Prudential’s Tipp.

Guggenheim’s Minerd agrees that the world economy is unlikely to face entrenched inflation any time soon. But if central banks eventually get the stronger economy they’re aiming for with the tidal wave of money they’ve unleashed since 2008, higher prices should follow, he said.