Interest Rates Are Up – But Mortgages Are Too 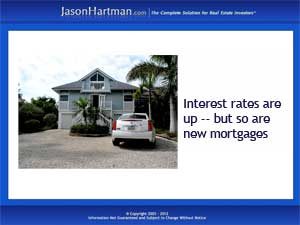 Mortgage interest rates are still astonishingly low, even though they’ve begun to creep up from the historic low levels of a few months ago. While some housing industry watchers have worried that the rise in rates could put the brakes on the emerging housing recovery, new data reported by the Motley Fool suggest that just the opposite is true.

Those low rates that made home buying so attractive in recent months were due in part to the Federal Reserve’s campaign to help the housing recovery by buying up billions of dollars worth of mortgage backed securities – a plan whose progress we’ve been reporting periodically in this space. The buyup meant that the Fed was pumping those billions into the coffers of lenders who could afford to offer their products at those record low rates.

Since the Fed announced that its deliberate manipulation of the mortgage market is coming to an end within the next few months, rates have begun to rise as the market resumes its natural ebb and flow. And that has fueled fears that rates will rise and so will housing prices, twin factors that could lock potential homebuyers cut of the market and put a chill on the housing recovery.

But data collected from the nation’s major lenders, including megabanks Wells Fargo, Citibank and JP Morgan Chase; reveal that although refinance mortgages have slacked, there’s been a significant upswing in new ones in the months since rates began to rise.

The trend is clear, although it defies conventional economic wisdom. The rate on a 30-year fixed rate mortgage of the kind Jason Hartman recommends was around 3.3 percent at the start of May 2013. After the Fed indicated on May 33 that it was preparing to wind down the bond buyup, rates began to rise, reaching their current level of around 4.5 percent today.

Just a few months ago, financial experts were worried about a decline in the number of mortgage applications, even as refinancing potions and homeowner support program’s were surging. Now, as refinancing applications decline, some suggest that lenders are simply putting more efforts toward attracting new mortgage customers.

And, of course, even though rates are rising, they are still low, so prospective homebuyers may still be rushing to lock in rates before they rise even higher. What4ever the explanation, though, it appears that rising mortgage interest rates may not be the death knell of the housing recovery that some have feared, In fact, those rising rates along with a steady increase in home prices suggest the hosing recovery is moving forward – a rosy outlook for investors in income property.  (Top image: Flickr/CatieRhodes)

Jason Hartman is the complete investing solution for real estate. Read more from our archives:

How Green Is Your Mortgage?
Is Yor Business Headed For Disaster?