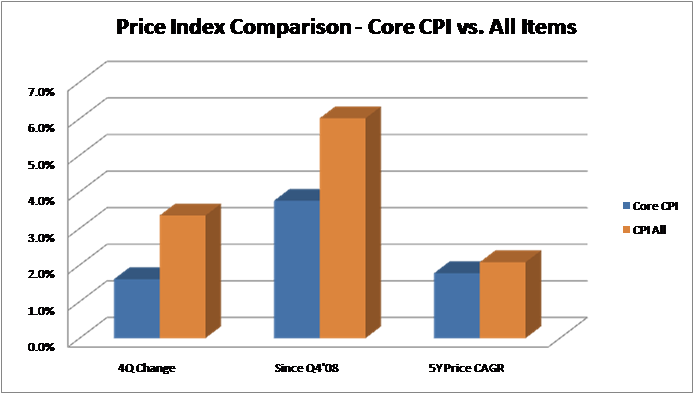 At the Financial Freedom Report, we have been warning about inflation for quite a while. For a long time, the Consumer Price Index has shown what appear to be very benign levels of price increases, leading some to believe that the monetary expansion required to finance profligate government spending can be done without consequence. However, analysis of both the methodology that is used to create the core consumer price index and a handful of other price indicators tells a significantly different story.

The most commonly quoted price indicator is the “Core CPI” that excludes food and energy. The stated purpose of this methodology is to show a less volatile price indicator. However, food and energy costs are very real and their absence from the prevailing index does not make them any less of a necessity. One of the more common index comparisons is the Core CPI vs. All-Items CPI. The disconnect between these two indexes is very stark across the last four quarters, and since Q4’08. Most of this is due to recent spikes in the price of energy. Over the last five years, the growth rate between the two indexes is much closer, but the “all items” index is still growing approximately 17% faster than the “Core” index.

Another point of comparison against the Consumer Price Index is the Producer Price Index or PPI. These two indexes differ in a very significant manner that makes their contrast even more telling. The Consumer Price index is based on a weighted basket of goods that is adjusted over time. The weightings of different areas are steadily changed, and the weightings within categories are changed to reflect perceived changes in consumer preference. In contrast to this, PPI tracks specific products and commodities over time. Thus, PPI is a much less subjective index, since it tracks specific products and specific commodities, tracking their aggregated price changes over time.

By adjusting the weightings and allocation of the CPI “Basket” it is possible to suppress the reported rate of inflation very significantly. Comparing the core CPI, all-items CPI, PPI for finished goods, and PPI for all commodities tells a very stark story. This unmistakable story is that over the past few years, products and commodities have been exploding in price while the reported CPI index has remained benign. Even when compared across a five year time horizon, the growth rate of PPI finished-goods and all-commodities indexes have been nearly double that of core CPI. This trend indicates that the price of real products and real commodities are growing twice as fast as we are being led to believe.

This observation merits further analysis into the component parts of the Consumer Price Index. In order to provide a basis of comparison, it is useful to compare the growth rates of the Core CPI, Food, Housing, Medical, and Energy. Since Q4’08, the two aspects that stand out the most significantly are energy and medical costs. Thus, it is quite interesting that Energy is completely ignored in the “Core” CPI, and medical is assumed to be a mere 6.6% of the “all items” consumer price index.

This is where the subtle problems of reported CPI figures come into play. The index assumes that people spend less than seven percent of their income on medical care. However, it is interesting to note that health care represents approximately seventeen percent of the US economy. The dramatic growth rate of heal care costs is being hidden by suppressing the weighting of medical costs in the reported price index.

One of the principal factors that is holding the CPI index down is slow growth in the ‘housing’ segment of the index, which represents approximately 41.5% of the total index weighting, and reflects the ‘equivalent rent’ of a residence, instead of the market value. The obvious driver of the suppressed housing costs is financial crisis and ensuing recession that has softened the equivalent rent for primary residences. However, most people don’t live in the world of an index. They purchase a home with a mortgage that has a fixed payment, which doesn’t go down when the price of their home decreases. Other people sign a lease for a house or apartment that frequently lasts one year and doesn’t go down if housing demand softens.

The summation of all these factors clearly points to one inescapable conclusion. Inflation isn’t coming, and it isn’t on the horizon, it’s here! The signs of price inflation are showing up in more and more places. The only place where inflation seems to be absent is in the government reported price indexes. The reason for this is quite clear … the political authorities do not wish to be held responsible for pursuing financial policies that escalate prices and rob people of their purchasing power.

The extended impact of inflation is a steady confiscation of people’s purchasing power by the government. As the Federal Reserve continues to print more money, it dilutes the supply of money available in the global marketplace, and pushes up nominal prices. The area where inflation lands first is in necessity items like food and energy. Furthermore, it impacts poor people the hardest since they spend a much higher percentage of their income on food and energy that middle class or wealthy people. In short, inflation has been engineered b the government to transfer wealth from you to them, and also carries the effect of transferring wealth from the poor to the rich as their asset values and rents inflate.

None of us possess the ability to singularly impact inflation. However, we do have the ability to singularly change the effect that inflation will have on us. By following Jason Hartman’s Financial Freedom Report system of prudent investing, it will place you in an advantageous position for the inflationary environment that has already arrived and is not likely to end at any time in the near future.

Action item: Shift your personal and financial decisions toward defending against inflation with high quality fixed-rate debt that generates rental income and is attached to real assets. The illusion of stable prices cannot endure indefinitely, and the façade will eventually break. When it does, you do not want to be among the masses who are clamoring for real assets … you want to own the real assets that people are clamoring for.