Identity Theft Insurance: Does It Deliver? 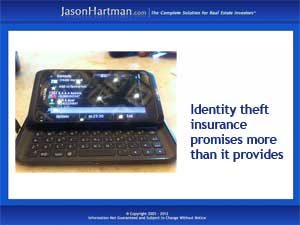 Identity theft has been making headlines in several different ways lately, beginning with the data breach involving shoppers at Target department stores over Thanksgiving 2013. Add to that news about domestic surveillance operations that point up jut how easy it is to hack personal information, and the end result is a lot of anxiety among those who use any kind of digital devices for managing finances and other kinds of transactions. And where there’s fear, scammers and opportunists are never far behind.

There are many legitimate devices and apps that work to cloak personal information sent from computers, cell phones and tablets, as well as services that help users monitor accounts to check for signs of fraudulent activity. But a newcomer to the arena of online identity security is identity theft insurance. And while some providers of this kind of service offer legitimate ways to protect information, cybersecurity experts warn that most promise far more than they actually deliver.

Identity theft insurance claims to protect buyers from the costs that arise when personal information is stolen by hackers and to assist with the time-consuming process of cleaning up the chaos created by identity theft. And those costs are real, ranging from fees associated with canceling cards and accounts and starting new ones, to work time lost and even damage o professional reputations. It’s no wonder that the prospect of coping with all these issues makes insurance sound attractive.

But is it worth paying for a plan? Online security experts say no. Some identity theft plans are being offered by the very institutions that have put users’ information at risk, such as banks, credit card companies and stores. For example, Target, whose outdated security systems put the information of over 40 million cardholders at risk, now offers a protection plan – as do Bank of America and its partner in bank fraud, JP Morgan Chase.

Even if a user buys a plan from an outside provider, it may not provide much in the way of real protection. These plans claim to cover expenses like legal fees, lost wages or other kinds of costs such as opening new accounts, but the victim of identify theft will still have to work with creditors directly. Lawyers are rarely relevant in this kind of case.

What’s more, most plans won’t cover identity theft committed by a family member, which security experts say is the most common situation. And they won’t reimburse for the actual money lost from hacked accounts, either.

Although it’s tempting to buy security with a plan that promises to do everything for you, it’s better to put resources into avoiding becoming a victim in the first place. A monthly charge for a service you probably don’t need and won’t protect you anyway can be used to check your own credit reports, change banks or set up other kinds of safeguards.

As Jason Hartman says, an investor’s creditworthiness is a treasure worth protecting. But it’s probably better protected with some vigilance and low cost measures anyone can take than by identity theft plans that promise a lot – but don’t deliver much.  (Top image: Flickr/denharsh)